Tattitude: A local philosophy on the tattoo “epidemic”

Last summer I was approached by a stranger while swimming.  “Could I ask you about your tattoos?” he asked.  He was from Canada, and he said that tattoos were like an “epidemic” in the States, but not in Canada.  He was kind, with only a hint of judgment.

“Did those hurt?” he asked, pointing to my chest.  “Less so then you might suppose,” I answered. “Since I tattooed them myself, I could anticipate the pain.”  I watched his face go slack in surprise. 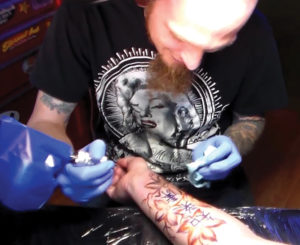 My husband bought all the tattoo equipment for us to “tattoodle” (as I call it) a few years ago.  I have only put in over a hundred hours into this art form, the most difficult medium I have explored.

“Tattooing is one of the coolest jobs you can have, but it is also incredibly grueling and incredibly technical to learn … especially as everything evolves and the equipment becomes more complicated,” said local master Jon Bates.

Bates blows me away in his ability to do gray work (portraiture, realistic trees and animals) which I hope to do.  He has been an artist “as long as I can remember.  My grandfather always has been, so I always drew and painted with him as a kid.”

Bates picked up the tattoo machine 12 years ago, as he says, “by accident.”

“I was cleaning a tattoo shop and ended up doing an apprenticeship,” he added.

He has invested 10,000 hours since then, and works in the heart of Sandpoint on Main Street from his Bleeding Hearts shop since February 2012.

This modern Sandpoint artist is also a kind soul, inspiring trust, investing his own bleeding heart into each masterpiece.  Surprisingly, those enduring the pain involved with Bates’ artwork appear to be relaxed.

One woman told me while Bates worked on her of a breakdown she had, existing in that space between life and death.  “I ended up in a mental institution actually … then the padded room because I was doing so horribly terrible,” she said. “All they gave me was my iPod, and I listened to this one song, ‘Ghost That We Knew,’ over and over again.”

The fresh black script on her left forearm read, “The ghost that we knew will flicker from view and will live a long life.”  As Bates packed red ink into the surrounding roses, she shared the inspiring tale behind this tattoo. “It just means, you know, things that happened in my past, anything kind of shitty that happened … those are ghosts, but they will flicker from view, and I am gonna live a long life.”

“Great story, huh?” remarked Bates, while hovered over the nearly finished roses.  His voice was gentle, and I strained to hear it over the buzz of the tattoo machine.

Often I will see a stunning local tattoo and learn it is yet another Bates masterpiece. Most of his clients have similar stories about their tattoos they are eager to share.

“The fascination with tattoos, to me, is pretty simple,” Bates said. “It’s just an external expression of people’s inner beliefs.”

“I love doing stuff like this,” Bates added. “It is so much fun.”

Maybe part of this great epidemic of modern art is something called “tattitude.” Think of it like this: If you like the look of me, great!  And if you don’t, ha!

Whatever the reasons for this “epidemic” of tattoos, the result is an influx of permanent, moving skin art. Some tattoos are beautiful, some are botched and even offensive. Either way, they are a boisterous presence in our culture. And if you are open, you might spot the work of a master, a beautiful piece of art moving in your presence.