Fifty years ago on Sept. 1, the Sundance Fire churned through the woodlands at an unprecedented rate, growing from 4,000 acres to almost 56,000 acres within 9 hours. Along with devastating the surrounding forests, there was also a tragic loss of two lives – a dozer operator and a fire control operator.

A series of events are planned to share information about the blaze, as well as commemorate the lives of Luther P. Rodarte, 36, and Lee Collins, 50. 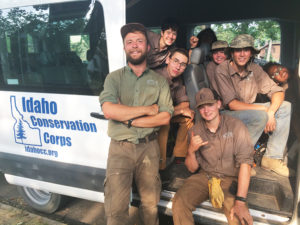 A crew of teenagers with Idaho Conservation Corps get ready to head up to Fault Lake Trail to clear brush and do trail work to prepare for the 50th anniversary of the Sundance Fire. Photo by Karen Bowers.

The Society of American Foresters is hosting a public event on Saturday, Sept. 2 at the Pack River Bridge on Upper Pack River Road where the Sundance Fire burned most of its land. It was during the westerly push on Sept. 1, 1967, where the two firefighters lost their lives. The memorial will take place from 9:30 a.m. to 12 p.m. The Sandpoint Ranger District and Idaho Department of Lands will be working with them for this event.

“There will also be a private memorial for the family at the Fault Lake trailhead,” said Erick Walker, district ranger for the Sandpoint Ranger District. “That trail is near the terminus where the two firefighters died. This will be the first time that the two families have met and engaged since 1967.”

Also, the museums of Bonners Ferry, Priest Lake and Sandpoint are hosting several events and exhibits in commemoration of this devastating fire. The Boundary County Museum will host a presentation on the Sundance and Trapper Peak fires on Saturday, Aug. 26, from 2-4 p.m. The Bonner County History Museum will host their own presentation on the Sundance Fire on Saturday, Sept. 2.

Priest Lake Elementary School’s presentation on the Trapper Peak and Sundance Fires on Wednesday, Aug. 23, from 7-8:30 p.m. at the school.

“This summer, a lot of people are going to use the Fault Lake Trail because of the 50th anniversary, so the trail needed work,” said Mary Ann Hamilton, the trail coordinator for Sandpoint Ranger District.

Hamilton said the work started with YCC, which is made up solely of local teenagers hired to clear brush and do trail work. This year, 18 YCC kids split their time between the Bonners Ferry, Priest Lake and Sandpoint Ranger Districts.

The YCC program is especially close to Hamilton’s heart since it utilizes locals from Sandpoint, Priest Lake and Clark Fork. Also, Hamilton got her start in natural resources in 1978 as a YCC kid.

“The local kids made great strides, but we realized we weren’t going to get it all,” said Hamilton. “So a fire crew stationed in Sandpoint went up for two days to help brush it out. Now ICC is here and they’re going to finish it off this week.”

ICC is based out of Boise and are essentially a mobile, self-contained unit.

“They’re pretty rugged,” said Hamilton. “They work all day and camp right on the trail, then get up and do it again.”

Hamilton said each year the YCC is advertised with the high schools, and they are also online.

“Think of it as a trails apprenticeship program,” said Hamilton. “They get to really learn what it’s like to be on a trail crew. If they stick with it, they do end up getting pretty good jobs. It’s a great segue, as well as a great way to work their way through college.”

To find more information about how to join the ICC or YCC, and for any other information related to the upcoming memorials for the Sundance Fire, contact the Sandpoint Ranger District at 208-263-5111. We will be publishing more in-depth content about the Sundance Fire in an upcoming issue of the Reader.