Gardening with Laurie: Color for later in summer

The spikes of iris, billows of lupins, and even the glorious blooms of the peonies are done for the year — peonies done by the Fourth of July! — so it’s time to cut them back and make room for mid-summer flowers. So cut down the Oriental poppies, the lupins, and the iris (cut the dead flowers from the peonies; leave all the leaves) to make space. 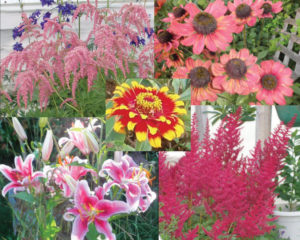 There are actually lots of flowers that bloom as we move into summer. Daylilies are nearly effort free plants (you’ll find them blooming away in abandoned farmyards and even road ditches) that, while each flower only lasts a day, have lots of flowers so one plant blooms over at least a couple of weeks. There are also early-, mid-, and late-blooming varieties, so daylilies can give quite a long season of bloom if you plan right. They come in orange, yellow, pinks, reddish purples, and almost white. The basic ones are just one color, but fancier ones have as many as four colors in each flowers: the throat, the main petal area, a halo and an edge. Some come with sparkles! And you can usually find a gardening friend happy to give you divisions of theirs; most varieties multiply quickly.

Astilbes are nice color for shady areas. The flowers are fluffy, upright plumes in white, pinks, red, and purple. The exception is ‘Ostrich Plume’; its flowers are graceful, weeping, pink sweeps.

The Shasta daisies have buds on them now that are about to burst open; they are a true, white that really show up in the dark. Don’t put them right by a seating area, though — just like field daisies, they smell bad.

Veronica spicata varieties come in white, light and dark pink, and light and dark purple, and have narrow, upright spikes for flowers. They bloom for a long time; if you cut them back after bloom, they’ll bloom again in late summer. They tend to stay small- to medium-sized; put them in the fronts of beds.

Liatris will be blooming by mid-summer; these plants are native to the eastern U.S. and can survive a lot. Each plant makes one spike of brilliant pink/purple (or white) that lasts a couple of weeks. It forms a corm (a bulb), which can multiply, giving the look of one plant with many blooms. It also spreads by seed, sometimes to quite a distance. They look marvelous in large clumps, and can take the heat of high summer.

The stars of mid-summer are the lilies. The Asiatic lilies bloom first; they come in bright oranges and yellows as well as pinks, whites, and reds. They have many flowers per plant. After they finish, the Oriental lilies go off. These are taller, have larger flowers with speckles and bands of color, and are magnificently fragrant. ‘Stargazer’ is the most common, and it’s still one of the very best. It’s white and bright pink, with flowers that aim upwards instead of out or down. Note: The deer love these. The other flowers mentioned above are fairly deer resistant.

Annuals like zinnias, petunias, sunflowers and snapdragons will be at their best mid-summer if you keep them deadheaded. All of these take heat well. And you still (barely) have time to start zinnia from seed right now!

Some shrubs are also good in summer; roses, of course; hydrangeas; the spireas that *aren’t* bridal wreath types; butterfly bush will come on later.

So while late spring may seem like the climax of the garden, there are still lots of blossoms to come.