It’s nice when good people receive the recognition they deserve.

Friends of Scotchman Peaks Wilderness (FSPW) program coordinator Sandy Compton was recently honored for his work to preserve wilderness, both on the job and as a volunteer. 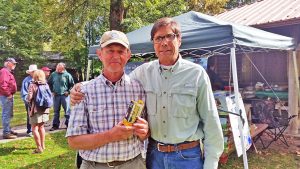 Compton was given a Brass Lantern Award at the recent Montana Wilderness Association (MWA) annual gathering.

MWA honors seven individuals annually with the coveted Brass Lantern, which, according to MWA, “is given to members and non-members alike, for leadership and taking action that promotes wilderness, quiet trails, and responsible management by managing agencies.”

In presenting the award, former MWA President and current FSPW Board Chair, Doug Ferrell, described Compton’s contributions to Wilderness: “Sandy’s family settled in Sanders County in the early 1900s, and he still lives on the land that his great grandparents settled. The land is located at the base of the Scotchman Peaks and several of the peaks are name[d] after his family. Sandy has been a tireless wilderness advocate for the protection and stewardship of family wildlands. He is a powerful storyteller and has worked for the Friends of Scotchman Peaks Wilderness since it was founded over ten years ago and has supported MWA as a solid partner and member. I cannot think of a more deserving Brass Lantern recipient.”

Compton was unable to attend the MWA gathering to accept the award, as he was busy that weekend teaching school kids how to build trails, stockpiling water at an alpine cache site for a whitebark pine restoration project and helping to put on the FSPW Thompson Falls, Mont., picnic. So, Ferrell brought the award back and presented it to Compton at the picnic in Thompson Falls on Sunday, Sept. 11.

Compton is the second FSPW staff member to receive the award. Two FSPW board members have also been recipients.