PacWest Silicon, the Canadian company hoping to build a smelter in Newport, Wash., has broken its prolonged silence with a letter to Washington Gov. Jay Inslee.

The letter is in response to an inquiry by Inslee sent to PacWest on Oct. 30, 2019, acknowledging the local opposition to the project and seeking an update from the company. 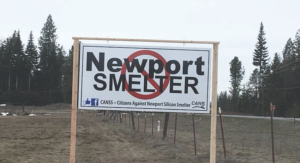 “This letter will serve as an update on our efforts while at the same time filling in some of the inaccurate gaps found in the local narrative,” PacWest CEO Jayson Tymko wrote in the introduction to the correspondence, dated Jan. 15. “And to be clear, this project is on hold. The project is not abandoned, it is on hold for the immediate future.”

Tymko went on to cite several challenges to the project, including failing to secure a meeting with the Kalispel Tribal Council, as well as “bad faith actions” on the part of the Pend Oreille Utility District regarding the cost to connect power to the smelter.

Pend Oreille County PUD General Manager Colin Willenbrock told Spokane Public Radio that the district tried to give PacWest an honest estimate of how long it would take to get electricity to the project. He also said “the scope of the customer’s project had changed and had several different iterations over the last few years,” causing the fluctuation in price and time estimates. Willenbrock said PacWest had asked for six times the amount of electricity the district provides for the rest of Pend Oreille County.

The PUD voided its outstanding contract with PacWest on Dec. 11, 2019.

Tymko also cited the Pend Oreille County commissioners’ denial of a blanket rezone — which would have designated PacWest’s land as appropriate for industrial uses — as another major roadblock in moving forward with the smelter. He told Inslee that PacWest “sat on the sidelines” for about two years while the Pend Oreille County Planning Commission “could not reach a simple quorum to take up zoning issues.”

“We have never experienced anything like this in any of the countless number of communities we have successfully done business in,” Tymko wrote.

The CEO also acknowledged the “vocal” opposition to the smelter, headed by a number of community groups. He said PacWest is proud of the relationships the company has formed with “countless” smelter supporters in the Newport area, but that those people have been “publicly silenced” by the opposing “vocal minority.” He said PacWest is especially “sympathetic to the workforce in the Pend Oreille area” due to missed job opportunities should the smelter plans not move forward.

“It is our strongly held opinion that the lack of professional behavior on the part of Pend Oreille County and the PUD has not only cost the local community 150 family wage jobs and economic activity,” Tymko wrote, “it has cost the State of Washington a major investor in the green economic supply chain.”