Troubadour ‘Whetherman’ to play at 219

Inspiration came in an unexpected form to Americana musician Nicholas Williams when choosing a stage name.

As he considered various options, he re-encountered a cherished book from his childhood: “The Phantom Tollbooth”  by Norton Juster. Early in the adventure novel, protagonist Milo encounters a character called Whether Man. Something about Whether Man’s parting words to Milo, “Whether or not you find your way, you’re bound to find some way,” stuck with the budding musician. As he continued to hone his musical ability, he did so under the stage name Whetherman. 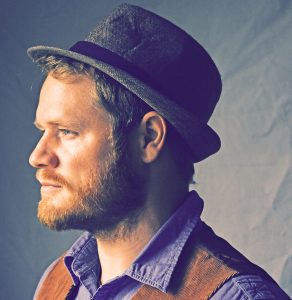 Nicholas Williams, AKA “Whetherman,” will be playing the 219 Lounge on Thursday, Sept. 22 at 9 p.m. Courtesy photo.

Several years and seven albums later, it’s clear it was a pivotal moment in a career that has taken Williams around the world.

Whetherman draws on American influences of blues, bluegrass and more to craft a brand of warm, infectious folk music. Endlessly adaptive, it’s a style equally at home in an intimate listening room or a smoky barroom. A tradition of music itself deeply rooted in the past, Williams said it has a similar effect on listeners, unearthing long-buried memories or emotions.

“I think I’m going for this reflective, nostalgic kind of thing,” he said. “A lot people tell me they feel transported to this place in their mind that’s comfortable.”

Williams writes a steady output of new material, finding inspiration in the natural world when he’s not traveling. His library of songs has filled out seven albums with plenty of material to spare, and he’s working on an eighth record for release in summer 2017.

“I spend a lot of time in the woods and nature between shows,” he said. “The titles for each album are nature-based for that reason. It’s not a direct influence, but it creates the peace of mind that lays the foundation for those songs.”

Despite performing uniquely American music, Whetherman has found a welcoming audience in Europe, which he has toured three times to date. The experience revealed a musical culture as vibrant as it is venerable, and stops in France, Germany, Spain and the United Kingdom reminded Williams why he does what he does.

“When I go over there, it’s kind of reveals the essence of why I do this,” he said. “It’s almost an out-of-body experience where everything is in the right place.”

Williams’ life has lately been defined by travel. He and his wife have more or less lived on the road, driving from tour stop to tour stop in their Sprinter van. They anticipate settling down for a time in Ashland, Ore., to shake off the dust, but knowing the life of a musician, it’s unlikely to keep Williams stuck in one spot for long.

The road takes Williams to Sandpoint this week, the second time he’s performed in town. Be sure to drop by for his 9 p.m. set at the 219 Lounge tonight: Thursday, Sept. 21.