Blitzen Trapper to play at the Hive

Blitzen Trapper is no stranger to changing up their formula.

Since forming in 2000, the Portland, Ore., band has experimented with a variety of alt-country and rock sounds, drawing from a suite of influences. Three years ago, the band embarked on yet another change, jumping from the music label Sub Pop to Vagrant Records. Since then, they’ve released two records. The most recent, 2015’s “All Across This Land” will be the star of the show when Blitzen Trapper plays The Hive on Friday, July 1.

Blitzen Trapper announced “All Across This Land” last summer with words to get any fan excited: “Really hope you guys enjoy this one—we think it’s our best yet.” Released in October, “All Across This Land” is crafted as the ideal live album. According to Blitzen Trapper frontman and songwriter Eric Earley, every aspect of the writing and recording process was informed by how it would play on stage. 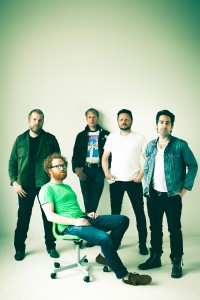 “There are certain things that just work well on stage, especially when it comes to arrangements and harmonies,” Earley said.

To that end, “All Across This Land” is perhaps Blitzen Trapper’s most classically rock ‘n’ roll album to date. The songs are built upon sturdy electric guitar hooks that do the likes of Bruce Springsteen and Neil Young proud.

“That’s was just the thing I was wanting to do—create a bigger-sounding record,” Earley said. “All of our records are guitar records, really. I just wanted this record to reflect that approach even more.”

The record came together with remarkable ease, Earley added. The process was a flurry of creative energy as the band completed the musical compositions for Earley’s lyrics. Recording followed just as seamlessly, with mixing handled by the band’s partners in New York.

Not long after “All Across This Land” was released, the band hit the road to support it. They started with a smaller series of shows, followed by a more intensive tour this year, which includes the band’s first performance in Sandpoint. There won’t be much time to rest afterward, as Earley has a storyteller tour planned. The tour is themed around Blitzen Trapper’s story songs along with covers of story songs from other artists.

For now, the band’s focus is completing their “All Across This Land” tour. The reception so far has been very positive, and to hear the fans tell it, “All Across This Land’s” focus on live-friendly music comes through loud and clear. According to Earley, the band itself is also in a place where it can truly embrace the stage. After 15 years, the members have built up enough material that they can really have fun with their sets, mixing in covers or reviving old songs with new arrangements.

“I think in certain ways our set can travel all over now,” Earley said. “[That’s largely because] we have so many records and songs now.”

Of course, to get the full effect, there’s no better opportunity than to catch Blitzen Trapper live at the Hive. The band plays hits the venue for the first time Friday, July 1, along with fellow alt-country outfit Frontier Ruckus. The doors open at 8 p.m., and the show begins at 9 p.m. The show is restricted to ages 21 and up.

Get tickets online at www.livefromthehive.com or locally at Evans Brothers Coffee, 7B Boardshop, Eichardt’s or show day at The Hive. VIP booths are also available—email [email protected] for more information.