Editor’s note: This is the first in a series of bi-monthly articles dealing with snow and avalanche safety in North Idaho. A revolving crew of writers within the Idaho Panhandle Avalanche Center will author the pieces.

The Idaho Panhandle Avalanche Center (IPAC) is gearing up for another busy winter as you read this article. 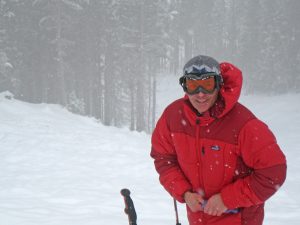 This photo of Doug Abromeit was taken on the backside of Schweitzer. Photo by John “Oly” Olson.

He’s excited to be here with his family, to be involved with IPAC, and also ski patrolling at Schweitzer Mountain.

IPAC provides weekly avalanche advisories for the Selkirk and Cabinet Ranges and the St. Regis Basin and Coeur d’ Alene Divide along I-90. We also teach a lot of avalanche classes to snowgoers of all persuasions. Look for us on facebook and our website mentioned below.

One thing you can look forward to, if you’re an addict for anything snow, is regular articles in the Reader on snow related topics.

I wanted to kick off this season by telling everyone about the Doug Abromeit Avalanche Scholarship. This is a great opportunity for someone to attend a level one avalanche class sponsored through IPAC.

Doug Abromeit was the founder of the National Avalanche Center (NAC). He is largely responsible for the vast network of avalanche centers across the western U.S. Doug also coordinated the avalanche control program that allowed the use of surplus military howitzers and ammunition for ski areas and highway passes. His occupation took him all over the U.S. to visit and work with different avalanche centers. He also traveled to other countries—Canada, Switzerland, India—to meet with colleagues, attend conferences and learn the trade from other practitioners.

I first met Doug in 2004 when I traveled to Sun Valley for an NAC meeting. It was still early on in merging of all the avalanche centers. Doug had some connections with the ski area for a place to meet. The resort gave us a small office supply room to meet in, but Doug welcomed us graciously and set a tone of importance to our agenda amidst the cluttered confines. Even though I was in the company of some avalanche elites, Doug gave me a role in the group and made me feel accepted. Doug was the type of person you knew you could trust right from the first hand shake.

Doug grew up in Sandpoint. He developed a love of the outdoors at the family cabin on the shores of the lake in Bottle Bay. When Schweitzer opened in 1963 Doug and his friends were some of the first skiers on the mountain. After he graduated from the University of Idaho he worked on a Blister Rust crew in Yellowstone and then as a firefighter. Doug was married to his wife Janet in 1974.  Together, they went to Alaska’s North Slope as teachers.

When they returned to the lower 48 they escorted 15 Inupiat kids for a visit to southern California. There was a stint with smoke-jumping while working with the Forest Service in McCall, Idaho. Then, following his true passion, Doug applied for and was hired on as Snow Ranger in Little Cottonwood Canyon outside Salt Lake City, Utah. This job set him on a course to later establish the National Avalanche Center. It was back in his home state of Idaho in Ketchum where he fulfilled his career directing the NAC and working to keep military weapons and ammunition available for avalanche control programs.

I think it was in 2011 when I went to Doug’s retirement party in Little Cottonwood Canyon, and I recall how excited he was to get back up to Sandpoint and explore some old haunts on skis.

Doug died in 2013 before he and Janet could get back to Sandpoint, this time possibly for good. His family is still here as well as some of his long-time friends. IPAC dedicates the Doug Abromeit Avalanche Scholarship, now in its fourth year, to honoring his legacy of mentorship of youth, love of the mountains, community activism, and his significant contributions to public avalanche awareness.

If you’re between the ages of 14 and 24, love to ski, board, snowmobile, climb, or snowshoe, this is an opportunity for you. If you’re a parent with kids that are getting into winter backcountry sports and you want them to get educated, this is for you. All you have to do is write an essay, shorter than this article, explaining why you should be selected to attend a Level 1 Avalanche Course and how you will use this education to promote avalanche awareness.

For further information on deadlines and where to send, go to: Idahopanhandleavalanche.org.  Just add this to your list of to do’s right after your wish list to Santa.

Kevin Davis is a Hydrologic Technician with the US Forest Service and works all over Bonner and Boundary county on National Forest land doing watershed related projects involving culvert replacement, road maintenance, and fish habitat improvement.