“There will be an extraordinary demand for airline pilots and technicians in the next decade.”
– the Boeing Co.

Students in the North Idaho High School Aerospace Program (NIHSAP) at Sandpoint High School are rebuilding an airplane in an airport hangar – currently installing the wings, getting the engine, propeller, flight controls and instrument panel installed and preparing it to be ready for flight next March. 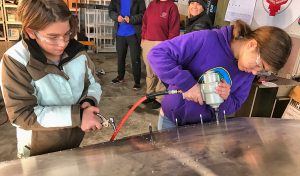 Led by program co-founder and former Air Force jet pilot training instructor Ken Larson, who teaches aerospace classes at SHS, his students are getting hands-on experience rebuilding a “kit” aircraft that literally needed to be reconstructed before it could pass FAA (Federal Aviation Administration) certification.

The students, working in a hangar provided by Granite Aviation, took the old aircraft apart and have upgraded the fuselage, the tail, wing spars and ailerons, putting new rivets in the wing. They are also rebuilding the old engine, refurbishing the crankshaft and pistons, and will be installing a new Cessna propeller along with the flight controls and an instrument panel. The local EAA (Experimental Aircraft Assoc.), along with local aerospace firms, helped, by donating tools.

Plans for the airframe and power plant came from Zenith Aircraft.

Larson will be test flying the Zenith CH601XL-B Zodiak, a two-place “sport” aircraft, when it is ready. He hopes to complete the 40 hours of testing by the end of March.

Some of these students, who work on weekends to rebuild the plane, will go on to take aerospace classes at North Idaho College or other schools and universities.

With a local shortage of qualified aircraft mechanics and aerospace workers needed to support the growing aviation industry in this area, local organizations are providing badly needed support. A grant helped a young woman attend NIC’s aerospace mechanics program, and a student, who graduated from Sandpoint High School in June, was recently hired by Quest Aircraft.

“Without the generous donations of time and skill by businesses, mechanics, engineers, flying enthusiasts and parents, the airplane building program would not be in existence,” said Barney Ballard, local businessman and former Air Force pilot. But “to make this program sustainable for the long term, we need help from industry and the community,” says Larson, who describes the aircraft building program as “quite unique.”  He is aware of only two other programs in the U.S. that have plane building projects.

Sandpoint High School’s aerospace program, now in its fourth year (the first year was at the Forest Bird Charter school ), offers two courses—a  Survey of  Aerospace and Aviation Careers, and  Pilot Ground School. Led by Larson and Career Pathways instructor Nayla Morton, students in the Survey class learn about a broad spectrum of career paths, including air traffic controller and dispatcher, as well as pilot and mechanic.

A near-term goal is to offer an Introduction to Aircraft Maintenance Technology course and an Aviation Mechanics Summer Camp led by FAA-certified mechanics.

In addition, Larson provides flight training at the Sandpoint Airport required for students pursuing a pilot’s license. Several of his former students are pursuing airline pilot jobs, including Sam Stocking who has been taking classes at Rocky Mountain College in Billings, Mont. He is working towards an instructor’s license to build flying time required to fly for airlines.

Larson sees a “very apparent change in his students becoming more confident and mature and better at teamwork as they take flight training. “And although based at Sandpoint H.S., participation in the aerospace program, including flight training, is open to all high school-age students. Classes include students from Sandpoint Middle School, Northwest Academy and home schooled students, Larson says.

As many as 40 students have gone through the local aerospace program, and several are enrolled in the aerospace program at North Idaho College. A senior student in the Aerospace Survey course, Joshua Kramer,  has decided he wants to become an Air Force pilot, and hopes to enroll in AFROTC (Air Force Reserve Officers Training Course) at the University of Idaho, and possibly join the Air National Guard.