Two out of five trucks transporting BNSF barges failed to stop at a boat check station early last week to be searched for invasive species before reaching Lake Pend Oreille, and dead mussels were found on one inspected barge.

Ten barges were brought to North Idaho by truckers hired under Wisconsin company E80 Plus Constructors, LLC. BNSF was having them transported for a maintenance project on the existing rail bridge across the lake. Of three trucks transporting barges through Clark Fork, only the third passing through stopped at the Idaho State Department of Agriculture-designated boat check station located there. 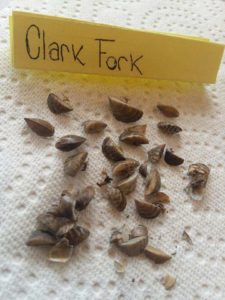 Boat inspector Doug Sterley said once he found out two trucks had passed the station, he headed for Kramer’s Marina only to find those barges had already been placed in the water without inspection.

Four barges on two trucks had yet to reach the marina traveling from the opposite direction via the Sandpoint route, so the truckers told Sterley they’d notify him when the last barges reached Hope so he could come inspect them.

On July 3, Sterley said he inspected the last four barges and found dead zebra mussels on one.

Nic Zurfluh with ISDA’s Invasive Species program confirmed that Sterley reported the mussels upon finding them, and that those mussels were found nonviable, meaning there was no threat that they would spread. An official ISDA statement said “the mussels were crumbling and floated in water during viability field tests. The barges were released due to no viable mussels being present.”

The statement also said ISDA first heard about the barges from the Idaho Department of Transportation, and then initiated contact with E80 Plus on July 2 to inform them of Idaho’s invasive species requirements. The company provided documentation the barges had been previously decontaminated and out of water for many months.

“ISDA has been in contact with the company which shipped the barges to Idaho to ensure understanding of the invasive species requirements for future loads of equipment including barges, work boats, buoys and gear,” the statement said.

George Thornton, who works at the Clark Fork boat check station with Sterley, said the barges did not have the apparent look of watercraft, but instead looked like “big boxes.”

“If that one truck hadn’t stopped, we wouldn’t have known (the barges) were even here,” Thornton said.

“It’s crazy that this happened because (invasive species are) such a national issue,” said Lakes Commission Coordinator Molly McCahon.

She said she didn’t believe vessels that fail to be inspected at Idaho boat check stations face fines, but deferred the Reader to the Bonner County Sheriff’s Office. Lt. Ed Jochum with the BCSO Marine Division said he’s not aware of any actions being taken against the involved companies at this time.

The barges last saw water in the Lake of the Ozarks in Missouri — a known mussel-infested body, according to Sterley. BNSF spokesperson Courtney Wallace said “each barge was cleaned, dried and certified decontaminated at origin.”

E80 Plus told the Reader that the 10 barges were dry docked for a minimum of 90 days prior to delivery, and that independent trucking firms were utilized via contract haul agreements to transport barges to Sandpoint from where they were docked in southern Illinois.

“The dry dock fact provides secondary assurance of no contamination risk to Lake Pend Oreille,” they said. “Both BNSF and E80 Plus Constructors, LLC, adhere to the rules governing our businesses. We respect the rules and are taking this issue with the independent trucking companies seriously as we, too, value the beauty and quality of Lake Pend Oreille and want to protect it.”

E80 Plus said they are investigating the two trucks — four barges — that were not inspected before being unloaded into the lake, and noted that one of those barges was “brand new and never in the water.”

Wallace said BNSF requires all contractors to “follow applicable local laws and regulations.” She said following this incident that BNSF has made plans with ISDA to “provide advance notification” of any equipment that is transported for use in Idaho waterways.

“This requirement will be put in place for this contractor and any others to ensure that every transported watercraft is inspected by Idaho authorities,” Wallace said. “We want to make sure there is an advanced coordinated effort moving forward.”

Amanda Abajian with the Bonner Soil & Conservation District, which oversees the local boat check station, said the lack of communication between the truckers, the involved companies and the state agencies led to the mishap.

“The fact is that there are different laws in different states, and you need to know the laws in your destination state,” she said.