Fractured Lines: A column all about snow safety

Weather’s effect on the snowpack

As the Snow Safety Supervisor for Schweitzer Ski Patrol, my main job involves tracking the weather over the course of the season. Every morning, I make my manual observations at our base area weather plot and then I compile data from our remote weather stations. From these observations, I develop a daily forecast of any hazards of concern and figure out how changes might affect our pack. Most days, this process is fairly routine, it gets more interesting when we experience more unusual weather. Temperatures, precipitation, and wind are the three primary focal points as they have the most direct influence on how the snowpack changes. 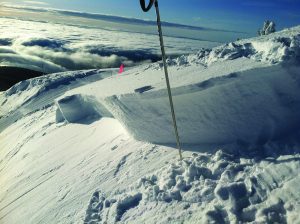 Examining the crown after mitigation work in South Bowl at Schweitzer in 2014. Photo by Jake Sullivan.

Temperatures, for me, have a greater import than just deciding what layers I need for the day, they actually dictate what metamorphosis process occurs. The temperatures this season have so far been below normal resulting in lighter density snow and promoting faceting within the pack. Whereas our typical Pend Oreille Premix usually arrives around 20% water content, this season our snowfall has been a more continental 7-11%. The Arctic masses that have settled over us do not promote bonding of the snow crystals in the pack; instead, large temperature gradients break down the bonds between crystals resulting in “rotten” or “sugar” snow. The long periods of cold and clear concern me as while this makes for nice skiing, this pattern actually weakens the snowpack.

Precipitation represents direct new load and stress added to the snow pack whether it arrives as fluffy crystals or the dreaded clear liquid. Snow Water Equivalent (SWE) over a certain time period tells me how much weight has been added to the pack- lighter density snow holds less water, resulting in less weight and concern. Rain adds heat and weight to the pack rapidly and also breaks down bonds between crystals. Rain on snow events can result in widespread natural avalanche cycles that are difficult to predict and may not react to our typical mitigation efforts. Snow is what we’re always hoping for but for me, can be the source of stress. Precipitation rate and intensity can mean the difference between calling for an early morning or knowing that we can enjoy some pre-opening face shots; the harder the snow falls and piles up, the greater the concern for avalanche activity as more load stresses the existing snowpack. How new snow bonds to the existing surface depends on many factors including storm temperatures. Light density snow on a rough surface? No problem. Heavier snow on a smooth surface? Probable avalanche activity.

Of the three weather factors I mentioned earlier, wind can have the most rapid effect on the pack. Even in the absence of snowfall, wind transported snow is one of the fastest ways to load a slope. Direction is a major factor in loading patterns and what I look at first. Last week’s northeast winds raised no alarms for me because the aspect of our start zones is susceptible to loading from southwest flows. Wind speed dictates how much snow gets moved around and how quickly. Three modes of wind transport exist dependent on wind speeds and result in different loading patterns. Rolling occurs in light winds when snow crystals remain on the surface, not resulting in drifting or cornice build. Saltation is a product of moderate to strong winds (16-35 mph) when crystals bounce or jump across the surface. This movement creates a lot of friction and damages snow crystals, causing them to pack densely together as drifts, cornice, or firm wind slabs. The last mode of transport is turbulent suspension which occurs during extreme wind events causing snow crystals to become fully airborne. Snow loading can be difficult to predict due to the force of transport. There are benefits to wind as well: wind can destroy weak surface layers such as surface hoar and can reduce the risk of wet avalanche cycles by cooling the snow surface.

You do not have to be a weather forecaster to be able to observe the effects of weather on the snow pack. Have to shovel your driveway before heading to the mountain? Rain in the valley but snow by switchback four? The stop sign at the corner rattling in a strong north wind? These are all clues that I use to form an impression of what’s going on with the pack before I even reach the mountain. Watch the weather and remember significant events over the course of the season.

If you’re interested in learning more, please check out my daily (M-F) weather observations on the Friends of the Idaho Panhandle Avalanche Center Facebook page.

In addition to serving as a Sandpoint city councilman, Tom Eddy is the Snow Safety Supervisor for Schweitzer Ski Patrol.