For a musician eager to keep moving forward, it’s always important to challenge the boundaries and to keep experimenting. For Sadie Sicilia—formerly Sadie Wagoner—opening for Ben Harper at the Festival at Sandpoint last summer was a dream come true, but also a catalyst for breaking out and trying a new sound. 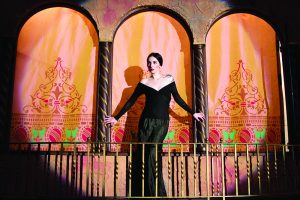 “Patricia Walker reached out to me and my mom after [the Festival show] and wanted me to have a show at the Panida,” said Sicilia. “It’s been talked about for awhile—a lot of Sandpoint locals have been telling me to do it.”

The golden-voiced singer-songwriter is planning a show at the Panida Theater on Friday, Feb. 10 at 7:30 p.m. to showcase a brand new arrangement.

“We haven’t played with this arrangement before,” said Sicilia. “It’s all super new, so I’m obviously a little nervous, but really excited.”

Sicilia is hoping to show her fans another side of her that is different from the performances that she has taken part in with her mom and dad.

The arrangement is enough to fill the Panida’s main stage; joining Sicilia will be her father Mike Wagoner on guitar, Reese Warren from Still Tipsy and the Hangovers on guitar, Sicilia’s mom Tammy Wagoner on bass, Chris Lynch on keyboard, Chris Terraciano on drums, Desiree Bernhardt on piano and Paz Rainbow on trumpet.

“This Panida show is an opportunity to show people what I really want to do with my music career,” said Sicilia. “What I’ve been doing with my dad over the years has been super fun, but it hasn’t been me; singing Bonnie Raitt covers and stuff.”

Sicilia said she has been writing her own music lately, and is eager to showcase it at the upcoming Panida show.

“I’m figuring out my own musical identity,” she said. “Folk, pop, I have a funk song that sound like something that James Brown would dance to. I want to make a point to get out of my comfort zone—I’m not just going to be playing with my dad in bars anymore.”

Singing on stage is nothing new to Sicilia, who has been performing with her dad since she was little.

“I started out as a super little kid who could sing a Janis Joplin song and people got a kick out of it,” said Sicilia. “So I felt like nobody ever wanted to see that change, they just wanted me to stay that young girl who could sing these songs.”

In her new experiment, Sicilia is focusing more on writing her own original songs – a departure from her normal routine.

One of Sicilia’s biggest motivations for songwriting is her own internal battles with depression. Some who have seen one of Sicilia’s shows have noticed how frank she has been with mental health issues that afflict a big part of the population.

“My songwriting so far is mainly influenced with my personal struggles with depression and anxiety,” said Sicilia. “One of my main goals is to connect with people over that.”

Sicilia said she first starting feeling these issues come up during high school.

“Nobody ever talks about mental health issues,” she said. “You don’t learn about it in your health class. I had no idea what was going on. Finally, I reached out to my dad and it turns out he had all the same symptoms in his 20s. As soon as I knew that, I thought, ‘I’m not crazy, someone else has experienced this.’”

While enjoyable in itself, writing music is also a way to deal with her emotions, said Sicilia: “It feels better to get it out instead of just holding it in.”

Along with her dream of having a family and touring the world with a record label, Sicilia also would like to be an advocate for mental health.

“I have dreams of having my own foundation called The Mountain Revolution to help people get affordable mental health care,” she said.

Sicilia will be playing at an art show at the Evans Brothers Coffee Roasters on Friday, Jan. 27 to help spread the word about her upcoming Panida show. Though she doesn’t have an exact time to start yet, she said she’ll be playing a handful of songs anywhere between 5 and 8 p.m.

“I have to say a huge thank you to everyone in Sandpoint,” said Sicilia. “Opening up for Ben Harper and having this opportunity wouldn’t be possible without their support.”

Sadie Sicilia and her very large band play at the Panida Theater on Friday, Feb. 10. The doors open at 7 p.m. and the show begins at 7:30 p.m. Tickets are available for $12 at www.panida.org or at the door the night of the show.