Fractured lines: a column all about avalanche safety

Can you think about a time you or someone you know had a near miss or close call in the mountains? I can.

Imagine a tree falling and pinning a 20-year-old, his buddy and brother down to the snowy ground. Luckily, this 20-year-old looked up and had one moment to yell. He took a step to grab his friend and dive behind another tree preventing fatal hits to the head. 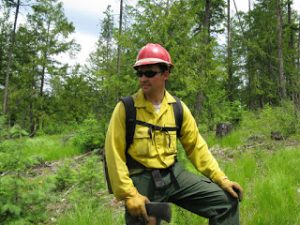 All three were pinned to the ground, two by their legs. One was able to slip out of his boot pinned underneath the tree. The 20-year-old and his brother weren’t so lucky. They were pinned by the tree. The little brother was turning purple in the face because his coat was pulled tight around his throat.

This moment is imprinted in my memory forever. The experience I had and the education I had received in the prior months as a wildland firefighter may have saved our lives that day. Leaping behind other trees is a standard procedure in the unlikely event a tree falls on the fireline.

Making decisions in dynamic situations is an important life skill but is especially important in the outdoors. Not only receiving an education but developing the ability to use a bank of slides from life experiences is an essential factor to preparedness and the decision making process. The backcountry is a dynamic environment, so it’s critical to not only gain a strong education in snowpack, weather and topographical influences but also the capacity to revisit slides from our memory before venturing into avalanche terrain.

The first critical element in decision making is the ability to bring up and use slides or experiences imprinted in our memory. Individual experiences as well as detailed stories shared by others allow us to cache fundamental slides for use when faced with making difficult decisions in avalanche terrain or other risky environments. A person grows “older and wiser” as slides build. Ultimately the slides become a significant part of our preparedness and decision making process.

It is unfortunate that many backcountry stories go unshared. These stories share lessons learned that could benefit others when faced with similar decisions. Reflecting on all aspect of the story both the storyteller as well as the listeners. Essential to a story are the specific details of what happened, what went right, what went wrong, mistakes made, and what might be done better if presented with a similar scenario in the future.

In these conversations pictures are painted and slides are built and pasted into other people’s minds. These slides are available for use when faced with similar circumstances.

The second critical element in making decisions is education. For example, getting educated in the three sides of the avalanche triangle—snowpack, weather, and topographical influences—is critical to a person’s safety in avalanche terrain. As a person studies each of these sides, it provides a better understanding of how changes in snow stability arise quickly. Education can be acquired through classes, books or time on the trail with more experienced individuals.

Conditions are constantly changing as one travels around the backcountry. Therefore, adequate experience and education is paramount to obtain an accurate perception of the snowpack.

Understanding sensitivity given the past, current and expected weather, elevation, slope aspect, weak layers existing in the snowpack and more are critical pieces of the picture. Even with a good base of experience, deciding whether to venture into avalanche terrain can be challenging. Human factors such as ego, peer pressure, aggressive objectives to climb a peak, and fatigue still tempt the recreationist into dangerous situations.

But that is another story.