Ahlquist spoke at the Sandpoint Community Hall to a group of a few dozen locals, outlining what he calls his “conservative blueprint for an even better Idaho.” His platform focuses primarily on small businesses, education, healthcare, tax reform, term limits and ethics. 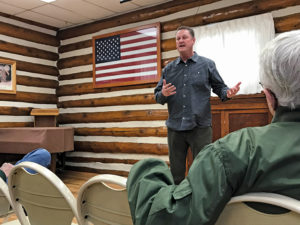 Ahlquist, a doctor and real estate developer, said his tour of the state has only affirmed his belief that listening to people is the best thing he can do as governor.

He said one of his main concerns after going on his 44-county tour is that the state places 44th in median income.

“It’s not about people not trying,” he said. “There’s no shortage of people working to make Idaho great.”

Throughout his talk, Ahlquist emphasized that he is a “solutions person,” and that he doesn’t approach Idaho’s issues with a partisan mindset. He drove the point home when asked about his donations to a number of Democratic Idaho campaigns.

“It’s not a partisan position,” Ahlquist said, noting he supports Democratic candidates, especially at city level, if he believes they’ll be smart with his investments in that community. “Anyone concerned about those donations has never done business.”

Ahlquist said he and his team have run the numbers, and his donations have been 80 percent to Republican campaigns and 20 percent to Democrats.

“I voted Republican my entire life, and the core values I believe in are all free markets and personal accountability: very, very much Republican,” he said. “And in all fairness to people, I don’t have a voting record, but what I ask people to do is look at my life and how I’ve lived my life. And more importantly, look at (my platform). Anyone who knows me knows that I’ll do what I say I’ll do, and I’ll do it quicker and more efficiently than you ever thought possible.”

Read more about Ahlquist’s “conservative blueprint for an even better Idaho” at tommyforidaho.com.