Leave it to an Irishman to write a play both introspective and nonsensical at the same time.  Waiting for Godot (pronounced God-oh) was Samuel Beckett’s first professionally produced play and opened in Paris in 1953 and was voted “the most significant English language play of the 20th century.” 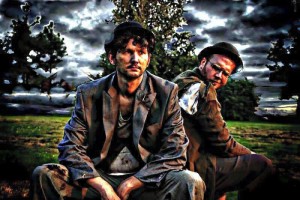 The story centers around two ragtag men both waiting for ‘Godot’, whatever or whomever that turns out to be. Their waiting place is a tree, seemingly in the middle of nowhere and their conversations during the wait are a web of wordplay, dreams and often times, nonsense.  Are they searching for the ethereal meaning of life, or waiting for someone to save them?  It’s up to each individual to decide.

I sat down with the Director, Dorothy Finigan Prophet, to get a little sneak peek into the play and her thoughts on the play itself, the actors and who she thinks Godot represents.

When asked why she selected this particular work to direct Prophet said, “I was looking for something I wanted to direct and didn’t like anything I read, until I read ‘Waiting for Godot’.  Five pages in and I was hooked.  It is so far out there and will really make theater goers think.  And it’s fun”.

The cast is all local favorites; Michael Bigley as Vladimir, Dan Simons as Estragon, Robert Moore as Pozzo, Mike Clarke as Lucky and Lucy Bigley as Boy.

Prophet readily admits she precast the show, “As I read the play I could see who each character was and I knew exactly who I wanted to play each part.  I was ecstatic when everyone I asked readily accepted.

Michael Bigley, as Vladimir, was the most familiar with Beckett.  He taught Beckett’s works, specifically ‘Godot’ for many years in school and had always wanted to do it.  Although he felt he was more bent towards Estragon, I clearly saw him as Vladimir.  Vladimir has a little bit of hope still left and I felt Michael could evoke that feeling well on stage.

Dan Simons as Estragon plays the ‘eyeore’ characteristics of Estragon perfectly and Michael and Dan play really well off each other.  The roles are a lot like Laurel and Hardy or Abbot and Costello.  Even the body types matter and they both fit my ideal of what those characters should physically look like.  It’s also a very tough play and I needed actors who I knew could handle it. None of the lines are conversational, they are mostly random and as an actor that is tough.  I had complete confidence they could do it.

Robert Moore as Pozzo has a really great range.  He can do a lot of different things.  Pozzo is kind of a pompous character.  He said yes without hesitation and told me he has had this play on his book shelf for years, waiting for the chance do it.

Mike Clarke plays Lucky and has one line, but it is a crucial line.

Lucy Bigley plays ‘Boy’ and provided great insight into her role and how pivotal this character is both Acts. The interesting aspect of this character is he says the exact same lines in both acts and the trick is to play them differently.  She does a great job.”

As to whether or not Prophet prefers directing over acting she said, “I like directing and if you direct from your heart and you have a vision it gels and comes together. I miss acting but I am happy doing both.”

As we completed our time together I asked her for her final thoughts on what the audience can expect to see and take away from the performance, “The play is like a walnut, you just dig through the nooks and crannies to find all of the little pieces and you can make up your mind as to what it is and what it isn’t.  Is it deep or is it shallow, or is it all bullshit. You can decide for yourself.”

I did ask Prophet who she thinks Godot is and she said…  Wait, I’m not going to tell you, you will just have to wait for the review, or as she stated previously, YOU can decide.

I for one cannot wait to see the performances which run October 3-4 and October 9-10 at the Heartwood Center.  Doors open at 6:30 p.m. and performance is at 7 p.m.