Gone, or soon to be gone, are the days when Idaho brewers played second fiddle to the state’s wine industry.

A new bill sponsored by Sen. Carl Crabtree, R-Grangeville, addresses a few historic inconsistencies with the way beer is classified and taxed in the Gem State. While the changes proposed in his bill won’t necessarily affect the day-to-day operations of breweries — which number more than 50 in Idaho, ranking the state 10th in the nation for breweries per capita — it does underscore how far Idaho beer has come into its own as an industry. 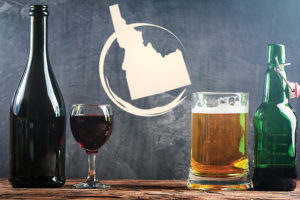 Sen. Crabtree’s proposed bill would address inconsistencies with the way beer is classified and taxed in idaho.

Put simply, for years Idaho beer measuring 5% alcohol by volume or more has been subject to the so-called “Wine Tax,” levied on what state regulators refer to as “strong beer.” In turn, 5% of the Wine Tax has been funneled to the Idaho Grape Growers and Wine Producers Commission, which represents the wine industry in its marketing and lobbying efforts.

That doesn’t make sense, she added, so Crabtree’s bill would reroute tax revenues on strong beer away from the Wine Commission and into the General Fund.

The bill would also update the standard measurement used by the state for alcoholic beverages from alcohol by weight to alcohol by volume — the latter being the commonly used measurement nationwide. The upshot with that is the allowable alcohol content for beer coming out of Idaho breweries will be matched with wine at 16% ABV.

“We’re getting with the times,” said MickDuff’s Assistant Brewer Mack Deibel, who also serves as vice president of Idaho Brewers United, representing brewers state-wide. “This is a step we need to take as an industry to stand on our own and set us up for further legislative success down the road. The day-to-day impact may be nil, but the impact will be what this allows us to do in the future by having our Beer Code in line ahead of time. Incremental and small change for huge impact in the long term.”

Dave Kosiba, who owns and operates Utara with his wife Christina, said “Idaho has always been very confusing,” when it comes to how it taxes and regulates beer.

“It’s been a little backwards,” he said. “I’m sure somebody in Boise thought it was a really great idea to limit beer to 5%, but the times have certainly changed. … We’re well past the time when the brewing industry can stand on its own.”

So-called “strong beer” represents the bulk of the output for most craft- and microbrewers, and that holds true for most Sandpoint area breweries.

Utara turned out 591 gallons of strong beer — its entire production for the month — and Kosiba said only two of his beers come close to the 5% mark. That means every beer he makes is technically taxed as wine, and concurrently supports the wine industry.

That money adds up. Crabtree’s bill would retain the current tax rates: $4.65 per 31-gallon barrel for beer 5% ABV and under and $13.95 per barrel for beer higher than 5%. If enacted, the legislation would siphon off the portion of that tax revenue that goes to the Wine Commission in phases over three years: $71,500 to the General Fund in 2021, followed by $100,00 in 2022 and $143,000 in 2023. After that point, the Idaho Grape Growers would not receive any additional funds from taxes on strong beer.

“What this does is allow us to have our designation for our products as it rightfully is, ‘beer,’ and not as a class of wine, which it is not,” Diebel said. “We cannot have part of our industry run by Wine Code and other parts by Beer Code; it needs to stand entirely on its own so we can draw comparisons with other states — tax rates, ABV cap — and make further changes that largely impact our industry specifically.”

Crabtree said he came to the issue when Wallace Brewing, which is located in his enormous District 7 — encompassing Shoshone, Clearwater and Idaho counties — approached him about changing the antiquated rules.

“Their concern was, ‘Listen, we’re putting money into the Wine Growers deal, we’re getting nothing out of it — nobody’s getting anything out of it, other than the Wine Commission, and wine is a competitive product,’” he said, noting that the current rules were written before Idaho had much of a beer industry.

“They found a pot to throw [strong beer tax revenue] in and left,” Crabtree said. “Then the microbrewery industry took off. … We want to be helping them when we can.”