Erik Bruhjell was someone everyone wanted to be around. That he’s not around, having died in a car collision in July 2018, continues to be deeply felt by those who knew and therefore loved him. As a friend told The Gonzaga Bulletin in August 2018, “His presence in general really brightened a room. He was always smiling. He was just a light.”

The 22-year-old Sandpoint local, who completed his high-school education a year early and had graduated from Gonzaga with a degree in environmental science a little more than two months before his death, was also a devoted lover of animals — and Evans Brothers coffee. 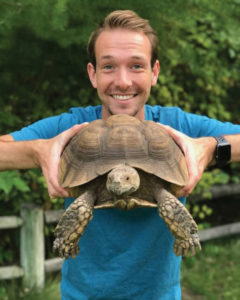 For the second year, Evans Brothers is hosting a fundraiser in his name benefiting the Panhandle Animal Shelter.

All three Evans Brothers cafes in Sandpoint, Coeur d’Alene and Spokane, as well as the website shop, will contribute a portion of proceeds Saturday, Dec. 28 to PAS, honoring Bruhjell’s spirit of care for all creatures big and small. Specifically, the funds will go toward spay and neuter programs.

According to The Gonzaga Bulletin, Bruhjell was an exceptional thinker, earning a minor in philosophy and channeling his deep understanding and interest in the world into animals and nature. As his partner Caden McClure told the paper, “He was a tree hugger in the most literal sense. When we went hiking or camping he would literally go around hugging trees.”

In addition to his studies in environmental science, Bruhjell worked at the West Valley Outdoor Learning Center and volunteered at the Humane Society. It could have been that he went into veterinary science — “Erik wasn’t exactly sure what he wanted to do, but he knew it would include animals,” The Gonzaga Bulletin wrote.

“He wanted to dedicate his life to God’s creatures,” a friend told the paper. “He always said there’s a whole world ahead of us — he always knew the future was going to be better.”

In honor of Bruhjell, Evans Brothers — which shares his initials — will sell special EB-style ball caps branded with Bruhjell’s name. In addition, PAS staff will be on hand at the Sandpoint cafe from 10 a.m. to 2 p.m. to offer information about its work and services. Bruhjell’s memory will be further commemorated with a tribute featuring a candle lighting and the opportunity for friends, family and the community to gather in remembrance.

All Evans Brothers cafes will be open from 7 a.m. to 5 p.m. and the website will collect donations — click “Donate to PAS” in the online shop — and offer hats for sale until midnight.

Visit evansbrotherscoffee.com for more information and to make a donation.