A look back at Mayor Carrie Logan’s public career

Leave it to Carrie Logan to finish her mayoral term with a bang.

The Sandpoint mayor and former councilwoman had an eventful final City Council meeting Wednesday thanks to her mayoral proclamation welcoming refugees. The proclamation and subsequent council action attracted a large crowd to City Hall for yet more political theater in the contentious national drama. According to Logan, the proclamation and resolution were more a coincidence than a deliberate mayoral swansong. 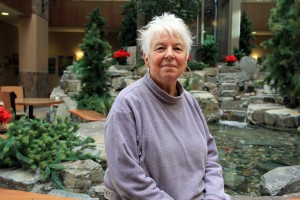 “That was just how the timing played out,” Logan said. “There wasn’t any strategy behind it.”

Even so, it’s a fitting capstone to Logan’s eight years of public service. As an action placing the city in contrast with the more conservative actions of the Bonner County Board of Commissioners, the proclamation is yet another example of Sandpoint’s distinct political and civic identity among North Idaho governments. It’s an identity Logan has played no small role in shaping.

Logan, who previously worked in Sandpoint as a mental health specialist before her involvement in local politics, began public life on the Sandpoint Planning and Zoning Commission. Logan’s political life truly took off, however, when she contributed to the drafting of the Sandpoint Comprehensive Plan, a 20-year map for the town’s development and growth goals.

“This was something I knew I wanted to have an influence on,” she said.

In many ways, the massive public project helped form Logan’s desire to extend her involved as an elected official. In 2007, she put her name forward as a candidate for the Sandpoint City Council. The subsequent campaign was an intense one, with no fewer than eight candidates vying for three open four-year seats and another three office seekers competing for one two-year seat. Ultimately, Logan won her seat alongside Stephen Snedden, Doug Hawkins Jr. as four-year council members and Michael Boge in the two-year seat.

As a member of the council, Logan saw some high-profile issues land on council agendas. The financing of the water treatment facility on Sand Creek required a major public push, especially after the first attempt at securing voter approval for a water bond failed at the polls. Logan said that, like the Memorial Field sales tax passed on a second attempt, the council learned a lesson about the importance of information campaigns when pitching the water bond to voters.

Logan’s support for efforts like the Pend d’Oreille Bay Trail and the protection of residents from discrimination based on sexual orientation or gender expression were yet more defining moments in Sandpoint’s political development. Introduced by Snedden and John Reuter, respectively, the measures helped set priorities to distinguish Sandpoint as a welcoming and amenity-rich community.

On the other hand, Logan helped lead plenty of other signature issues, including the preservation of the Sandpoint Train Depot. Brought to council attention by then-Historic Preservation Committee member Aric Spence, local officials mobilized to keep train service at the historic site. Logan and Public Works Director Kody Van Dyk lead negotiations with Amtrak and BNSF Railway and ultimately secured their cooperation. Logan credits the success to the relationships she built with Amtrak and BNSF representatives over months of work.

“Relationship-building is huge for success in city government,” she said.

If there’s one issue Logan regrets during her time on council, it was her inability to stop the the de-fluoridation of Sandpoint’s water. A public health measure to reduce tooth decay, water fluoridation is nevertheless controversial among people who believe fluoride carries harmful side effects. Despite a lack of existing scientific research backing this claim, the council voted to remove fluoride from public water in 2010.

“That’s the one thing I wish Reuter and I managed to save,” Logan said.

In 2011, Marsha Ogilvie was elected mayor of Sandpoint, and Logan reclaimed her council seat for a second term. However, tragedy struck in 2013. Ogilvie found herself unable to continue her work as mayor due to aggressive lung cancer. In October, she asked Logan to take over as interim mayor and privately requested she take the job permanently if the worst happened. She passed away months later in January 2014.

For Logan, the transition was awkward. Staff used to working with Ogilvie found a new person in the mayor’s chair difficult to take. Even so, Logan gave them assurances that business would go on as usual.

“My first conversation with department heads and staff was that nothing was going change,” she said.

The transition to mayor carried with it a learning curve, but Logan said her years on the council helped prepare her. Even so, the greater emphasis on diplomacy—playing the mediator between council members, disgruntled residents or the city’s business partners—took some adjusting. So to did the minimization of her contributions to council debates.

Indeed, Logan is nothing if not outspoken and committed to her vision, traits that sometimes raised controversy. In December 2014, the city took heat when resident Randy Stolz was not permitted entry into a meeting about coal and oil trains. Logan later defended the choice, saying it was a closed meeting only meant to provide information for regional officials. Her choice to use a mayor-appointed selection committee and limit public contributions to the hiring of the new city administrator position was similarly controversial. The decisions helped fuel the 2015 mayoral campaign of Mose Dunkel, who claimed the city was too closed off and not responsive enough to the public.

Logan said criticisms like those are inevitable when shaping public policy. Sometimes that takes the form of outright ugliness, and  Logan said she’s received plenty of it over the refugee proclamation and resolution. Over the course of eight years, she’s learned to filter out the vitriol.

“I have learned to take the valid points of the criticism and respond or deal with those and discount those that are baseless, mean-spirited or flat-out rude,” she said.

As she prepares to take a break from public life, Logan is satisfied with her accomplishments. Having weathered the Great Recession and enacted some milestone policies, she believes the city is in better shape than it was eight years ago.

We got a lot done,” she said. “We’re in very good financial shape. We have a competent dedicated staff. We’ve always got a lot to show for [our work].”

As for what the future holds, it’s always possible that we haven’t seen the end the Logan’s public career. For the present, however, she’s turning herself to more pressing concerns.

“I want to learn to wolf whistle,” she said. “There are a lot of YouTube videos about it out there, and I think I can do it.”