The Idaho Legislature’s Joint Finance-Appropriations Committee on Oct. 19 did not discuss or debate Lt. Gov. Janice McGeachin’s supplemental budget request to have taxpayers cover her outside legal bills.

Instead, JFAC members and staff budget analysts took a deep dive into the state budget and revenue picture, including other supplemental budget requests, during a daylong meeting at the Idaho Capitol.

JFAC members did not discuss — and nobody asked about — McGeachin’s request to have taxpayers spend $50,000 to cover her legal bills stemming from a successful Idaho Press Club lawsuit filed to obtain public records of McGeachin’s education task force.

A day earlier, on Oct. 18, JFAC’s four Democrats — Sens. Janie Ward-Engelking, D-Boise, and Mark Nye, D-Pocatello, and Reps. Brooke Green and Colin Nash, both D-Boise, sent a letter to McGeachin asking for more information about her supplemental budget request for legal bills. The Democrats asked McGeachin how she would pay for the court-ordered costs and fees. They also asked for unredacted copies of McGeachin’s legal invoices and her legal agreement with her private attorney.

Nash told the Idaho Capital Sun on Oct. 19 that he has not received a response from McGeachin or any of the records Democrats asked McGeachin to provide.

“If there are some expenses to these legal costs, I would like to see those supported by documentation,” Nash said. 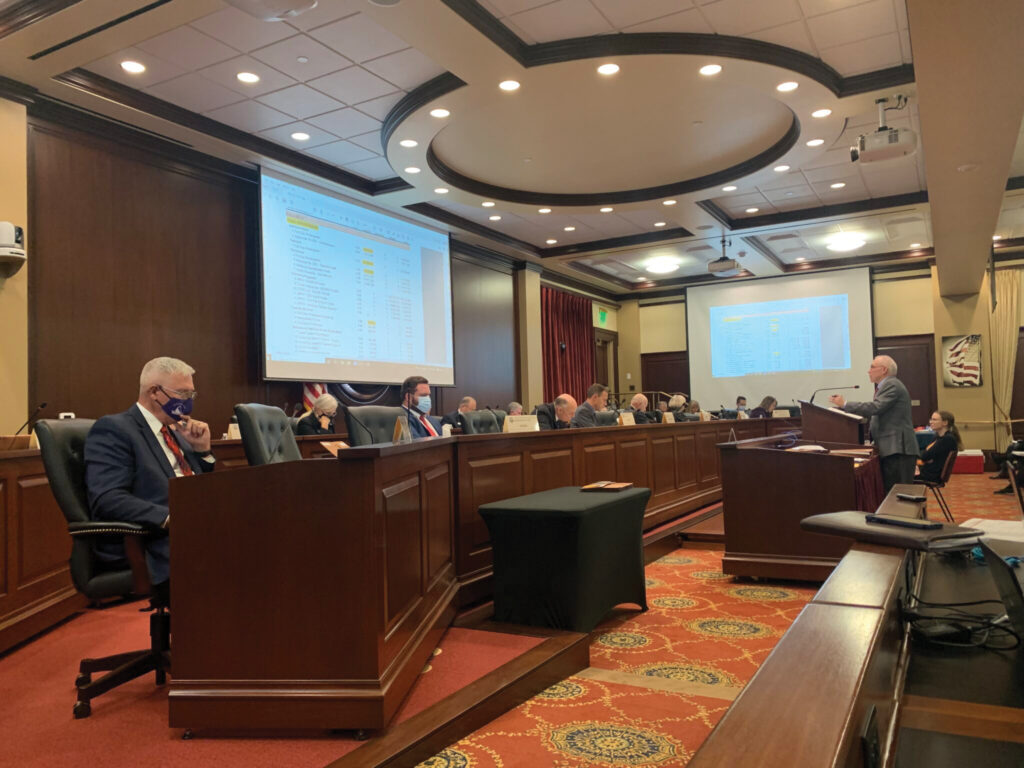 In that regard, the Oct. 19 meeting didn’t add any clarity to how McGeachin came up with her $50,000 supplemental budget request. Earlier this month, McGeachin’s office told the Idaho Capital Sun it couldn’t find any invoices for her legal services, even though she filed a supplemental budget request seeking $50,000 for what she described as “unforeseen legal bills related to a lawsuit from the Idaho Press Club.”

The supplemental budget request only represented a portion of JFAC’s daylong meeting Oct. 19. Committee members also received an update on federal COVID-19 relief stimulus packages and an update on how Idaho’s budget and revenue are taking shape.

State budget analysts spent much of the morning discussing how Idaho is sitting on a historic pile of cash and savings balances.

Through the first quarter of the current 2022 fiscal year, the state is on track to end the fiscal year with $1.45 billion more on hand than was forecast when the Idaho Senate adjourned the session for the year on May 12.

“That is an extreme amount of money that I don’t think any of us ever expected,” Legislative Services Office budget analyst Keith Bybee said.

Much of the forecasted surplus is due to carrying over $889.1 million in one-time money from the record 2021 budget surplus and an increase in revenue.

Since the 2022 fiscal year began July 1, revenues are exceeding the latest forecast by

Idaho also has $846.8 million dollars in state savings and reserve funds. The main savings account, the Budget Stabilization Fund, has a balance of $677.7 million, which is the largest balance in state history, Headlee said.

Taken together, Idaho’s cash balance and savings and reserve funds balances translates to about 36% of the state’s forecasted revenue for 2022.

Aside from that, Idaho has had about $5.7 billion in American Rescue Plan Act federal COVID-19 stimulus money available for the benefit of the Gem State.

State agencies have until Oct. 23 to update supplemental budget requests

The Idaho Press Club sued McGeachin in July, and she was represented in the case by attorney Colton Boyles of Boyle Law.

On Friday, McGeachin responded to an Idaho Capital Sun reporter on Twitter, tweeting: “We can’t find what we don’t have and we haven’t received any invoices.”

Many of the details of McGeachin’s legal agreement with Boyles Law remain obscured from the public. In response to an earlier public records request, McGeachin provided a heavily redacted copy of her agreement with Boyles Law. Everything on the five-page document, including the page numbers, was blacked out except for Boyle’s hourly rate of $250 and his paralegal’s hourly rate of $120.

The unredacted legal agreement could provide additional clarity about McGeachin’s arrangements with Boyle and her expenses.

Legislative Services Office officials said the deadline for state agencies to submit any revisions or corrections to their 2022 supplemental budget requests and 2023 budget requests is the end of the day Friday, Oct. 23.

McGeachin’s office has not submitted a request for an extension on Friday’s deadline, Legislative Services Office Deputy Director Paul Headlee said in an interview.

JFAC is not scheduled to discuss supplemental budget requests any more this week, Headlee said.

It was not immediately clear Oct. 19 where McGeachin’s request stands or what will happen next. In order for McGeachin to get the $50,000, JFAC would need to recommend approving the supplemental request and then a majority of members of the Idaho House and Idaho Senate would need to vote in favor of a supplemental budget bill. That wouldn’t happen until after the 2022 legislative session convenes Jan. 10.

Sen. Steve Bair, a Blackfoot Republican who serves as the co-chairman of JFAC, said he is aware of McGeachin’s request. Bair noted the supplemental didn’t come up Oct. 19 and said he wasn’t aware the request was included in the packet of materials JFAC members received. The request only appeared on a single line on the 25th page of charts and spreadsheets JFAC members waded through.

“We’ll deal with it just like all other supplementals,” Bair told the Idaho Capital Sun after the Oct. 19 meeting. “We’ll consider it and see what happens.”

McGeachin did not attend the meeting.

Records obtained by the Idaho Capital Sun show a Division of Financial Management analyst did request more information, including copies of invoices, in a September email to McGeachin’s chief of staff.

On Oct. 8 Jordan Watters, McGeachin’s chief of staff, responded to the analyst writing invoices are “not currently available.”

How to watch the JFAC meetings this week

The Oct. 19 meeting was the first of three days worth of hearings for JFAC. Although the Legislature is not in session, committee members use the offseason meetings to get up to speed on the state budget and revenue picture and prepare for budget writing during the upcoming 2022 legislative session that begins Jan. 10.

JFAC members didn’t take any votes or make any decisions on Oct. 19. Instead, the meeting was mostly informational and educational. The final meeting is scheduled to begin at 8 a.m. Thursday, Oct. 21 in the Lincoln Auditorium, Room WW02 on the Garden Level of the Statehouse. The meeting will be streamed live online, for free, using Idaho Public Television’s Idaho in Session service (idahoptv.org/shows/idahoinsession/jfac).

JFAC is one of the Legislature’s largest committees with 20 members. It includes 10 members each from the Idaho House of Representatives and the Idaho Senate. Overall there are 16 Republicans and four Democrats on the committee.