Western U.S. moving into what could be a heavy fire season

Area fire crews continue to battle a trio of blazes in or very near Bonner County — two fanned by high winds that ripped through the region on Labor Day, Sept. 7, and the other reported the morning of Sept. 8.

As of noon on Sept. 9, the Bernard Fire was burning on 188 acres of steep timber from Echo Bay to Bernard Peak southeast of Bayview at the southern end of Lake Pend Oreille.

First reported around noon on Sept. 7, the fire quickly spread uphill, driven by high winds into rough terrain requiring fire managers to use several aircraft, including two large tankers and two helicopters, to attack the flames with aerial-dropped retardant. 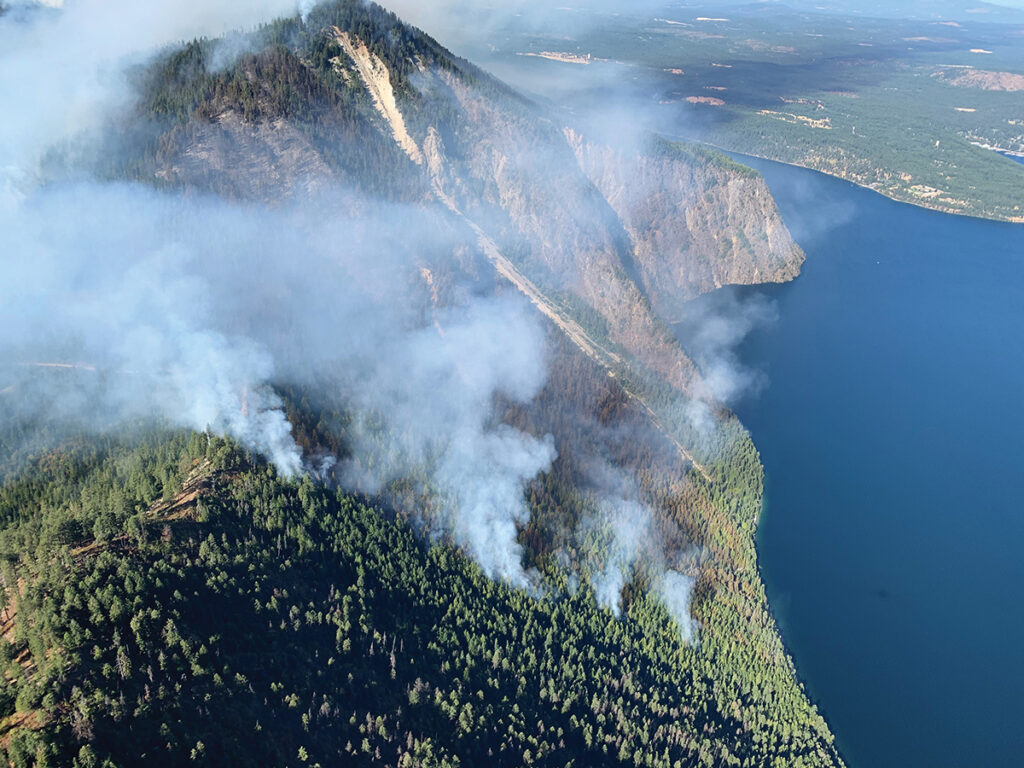 According to a Sept. 8 news release from the Forest Service and Idaho Panhandle National Forests, ground crews are also working the Bernard Fire, coordinating with aircraft to pinpoint the best targets for further retardant drops.

A total of 27 personnel were assigned to the fire as of Sept. 9, according to the Incident Information System wildfire reporting database at inciweb.nwecg.org. Officials reported on Sept. 9 that three engine crews and two “initial attack modules” are working the fire on its southern edge, where the terrain is “more accessible.” The cause of the blaze is still under investigation.

Fire managers announced Sept. 9 that suppression efforts focused on keeping the fire from spreading east, closing a number of roads and trails to allow crews unrestricted access to the area:

Meanwhile, to the west, the Hunter 2 fire is burning on about 700 acres a half mile northeast of Blanchard, near the junction of Hunter Road and Highway 41. According to InciWeb, the blaze jumped the highway to the Stoneridge Golf Course, prompting evacuation orders and road closures.

The Bonner County Sheriff’s Office announced late Sept. 9 that all evacuations in the area are lifted, while Hunter Road, Flying Geese Way and Stone Road are open to residents only.

“All other roads are open to normal access,” BSCO stated in a Nixle alert. “Be cautious of fire equipment in the area.”

As of presstime, four crews and five engines were reported to be assisting Idaho Department of Lands firefighters, engines and bulldozers, alongside several rural fire department engines and tankers.

Finally, a smaller fire — logged at about 20 acres when it was initially reported on Sept. 8 — is burning in the high country northeast of Lunch Peak near the Idaho-Montana border in the Kootenai National Forest. The Callahan Fire, burning about 12 miles west of Troy, Mont., in the South Callahan Creek drainage near Smith Mountain, is currently being worked by 25 fire personnel, using engines, hand crews and aircraft.

The fire is moving uphill west-northwest through steep, snag-filled terrain, with the possibility of rolling material, creating “moderate to high potential for spread,” according to officials. Fire crews have closed Road 4530 to access the burn.

Fire managers underscored that private drones should under no circumstances be flown over or near active wildfires.

“If you fly, we can’t,” stated USFS-IPNF in a news release, citing the risk of mid-air collisions with firefighting aircraft. If fire managers encounter drones in their flight area, air operations could be suspended until the collision risk is resolved.

“When firefighting aircraft are grounded for any reason, fire crews lose access to a valuable resource, which can adversely affect the safety and efficiency of the overall firefighting effort,” officials stated.

As of Sept. 9, more than 20 active fires were burning in Idaho or very near its borders with Washington, Montana, Wyoming and Nevada. According to the National Interagency Fire Center, based in Boise, 12 states in the West — from Alaska to New Mexico — were reporting 96 large active fires, encompassing nearly 3.5 million acres. A rough count of active fires in the West on InciWeb showed well more than 100 as of Sept. 9, while national reports state “much of the American West is on fire” as it enters what is typically considered only the beginning of fire season.

For fire updates go to inciweb.nwcg.gov, nifc.gov/fireInfo/fireInfo_main.html or sign up for real-time local alerts at nixle.com.