Rognstad sworn in as mayor

Outgoing Mayor Carrie Logan was lauded by members of the council for her public service and compassion before stepping down as acting mayor of Sandpoint. 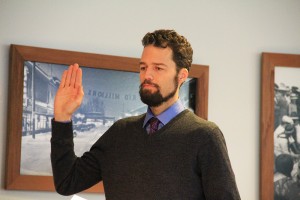 Shelby Rognstad takes the oath of office as mayor of Sandpoint. Photo by Ben Olson.

“I guess that’s all,” she said, leaving the chamber to applause from the capacity crowd. The meeting served as Logan’s last public meeting in eight years of public service at city hall.

The next order of business was the swearing in of Sandpoint’s new mayor, Shelby Rognstad. Rognstad won the city election in November with 1,126 votes as compared with 628 votes for his opponent Mose Dunkel. Rognstad has lived in Sandpoint since 1999, where he owned and operated the coffee shop Common Knowledge for 10 years before closing the business this fall to run for office.

Councilmen Eddy and Aitken, as well as Councilwoman Ruehle all took the oaths of office for new City Council terms. The three incumbents ran unopposed in the 2015 election.

Councilwoman Shannon Williamson was elected City Council president by unanimous vote (Councilman Camp was absent from the meeting due to ill health). Williamson took office as a city councilwoman in 2014 and has served as executive director of the Pend Oreille Waterkeeper since 2011.