When the Panhandle Health District voted in favor of a mask mandate for the five northern Idaho counties on Nov. 19, the public conversation quickly turned to how, exactly, local law enforcement agencies would enforce it.

That discussion transitioned to ideology and finances during the Nov. 24 business meeting of the Bonner County commissioners, as Commissioner Steve Bradshaw used the public comment period to informally propose a resolution to rescind funding for the health district, which the county provides on a quarterly basis. 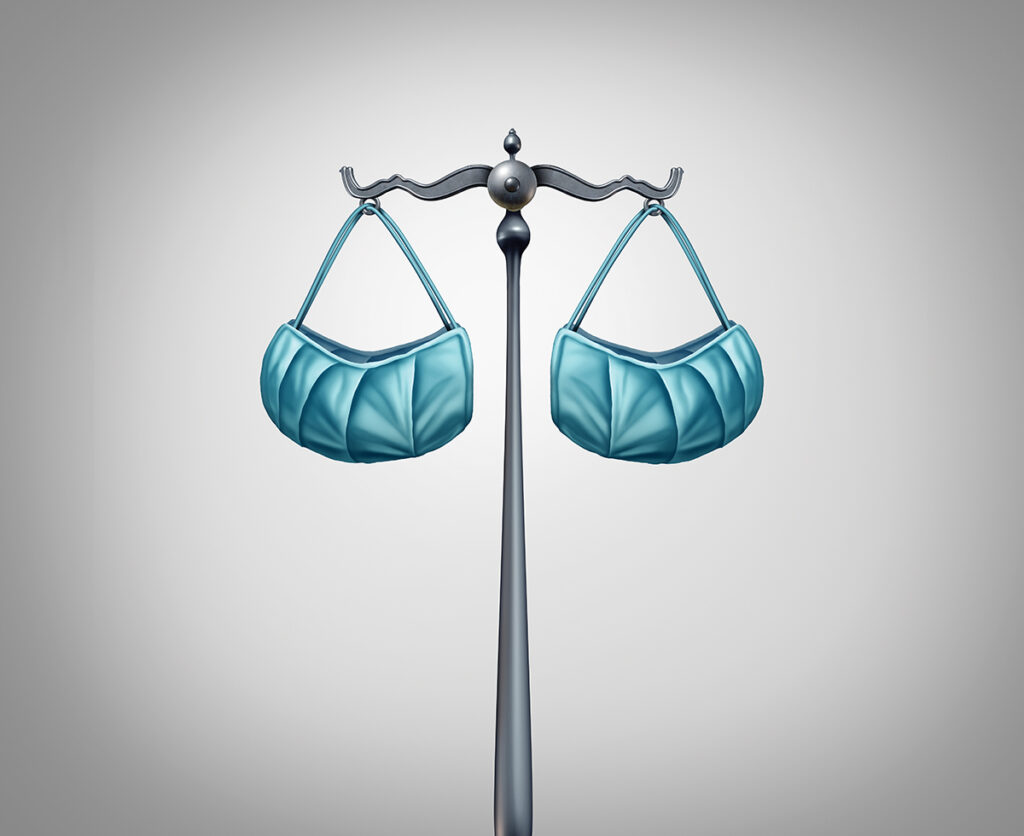 “Breath is the very essence of life. There is no human right more fundamental than the right to breathe, for without it, life itself would cease to exist,” Bradshaw read from the resolution. “No government agency has the power to regulate this fundamental right. Unfortunately, this is precisely the power erroneously claimed by Panhandle Health District by the issuance of its mask mandate. The Panhandle Health District enjoys no such power.”

The resolution suggests a four-tiered approach to defying the PHD mandate: by stating that no Bonner County agency shall enforce the mask mandate; no Bonner County funds be used to enforce it; no further funding “of any nature whatsoever” will be used to support PHD, while also calling “for the disgorgement” of all funding given to the health district so far in 2020; and by declaring that “Bonner County shall undertake all available legal challenges to the legitimacy of the mask mandate and hereby authorizes the county prosecutor and civil prosecutor to institute such challenges forthwith.”

For the 2020 fiscal year, Bonner County budgeted more than $250,000 to help fund the health district, which manages regional health issues from the pandemic response to septic permits, and provides services like the Women, Infants and Children nutritional education program.

At the conclusion of Bradshaw’s resolution, Board Chairman Dan McDonald said that the commissioners would need to publicly advertise the item in an agenda before discussing or voting on it, so the board will “get it on next week’s agenda.”

As for other Bonner County officials, the response to PHD’s mandate is fairly uniform: it won’t be enforced. In a statement posted to Facebook Nov. 23, Sheriff Daryl Wheeler stated plainly that his office “will not be enforcing” the mandate.

“Governor [Brad] Little, instead of calling up the Idaho Legislature, empowered the unelected Panhandle Health District with a legislative function. Please read what the Panhandle Health District wrote, and decide for yourself how it could possibly be enforced,” Wheeler said. “The Bonner County Sheriff’s Office is working at maximum capacity on real crime, and it cannot enforce the unenforceable mask rules.”

As Wheeler alleged that his office “cannot” enforce the mandate, Idaho Code backs up his claim. According to code surrounding the enforcement of penal laws, Idaho sheriffs are given extreme discretion when it comes to choosing which laws to enforce. While the governor is able to call on the Idaho State Police to act independently of local law enforcement if state statutes are not being followed in a certain county, “the primary duty of enforcing all the penal provisions of any and all statutes of this state … is vested in the sheriff and prosecuting attorney of each of the several counties.”

Bonner County Prosecutor Louis Marshall told the Reader in an email Nov. 22 that he’s been working with Wheeler and local police chiefs and determined that “law enforcement’s role in Bonner County will be educational in nature” and that if someone is cited for violating the mandate, his office will “look at the facts and circumstances before making a decision.”

“Prosecutors are given wide latitude of discretion on the ultimate enforcement of laws. I would argue this is a good thing,” Marshall said. “We have serious issues in this community with violence and hard drugs. Our jail is full, and it is full for the most part with people who have committed felonies. My focus will remain on those issues and not a mask mandate.”

Marshall, Wheeler, Sandpoint City Administrator Jennifer Stapleton and Sandpoint Mayor Shelby Rognstad all told the Reader that there was no communication or consultation between the health district and local law enforcement regarding the mandate’s enforceability prior to its adoption — a fact that PHD did not dispute.

Stapleton added that despite the lack of advanced communication, the city was prepared to adapt to its enforcement aspect — “They had taken this up before,” she said, referring to the Kootenai County mask mandate passed earlier in the fall, then rescinded. “I think it would be fair to say we weren’t surprised, given the increasing case numbers, that they would issue a mask mandate.”

Rognstad said that he appreciated PHD making a “difficult decision,” and the order demonstrates the “solidarity of the five northern counties” in combating the virus, the spread of which has spiked both regionally and nationally in recent weeks.

Yet, “I was a little bit blindsided,” Rognstad added. “It feels unique because of the nature of it, because it’s such a novel mandate. We’ve never had anything like this.”

According to PHD spokesperson Katherine Hoyer, in an email Nov. 24 to the Reader, “The Board of Health makes the decision on a mask mandate and we don’t know what that decision will be until they make that determination at the meeting. Therefore, it would be premature of us to communicate with law enforcement.”

The mandate, which passed with a 4-2 vote, states that every person in the five northernmost Idaho counties “is required to wear a face covering that completely covers the person’s nose and mouth when the person is in a public place and physical distancing of 6 feet from others cannot be maintained” for the next 60 days. It goes on to list some exceptions, including children under the age of 2, persons with certain medical conditions and incarcerated persons — an exception that Marshall said he finds “more than slightly ironic,” seeing as those who disobey the mandate could face a misdemeanor punishable by a fine, imprisonment or both.

According to Idaho Code, PHD is within its powers and duties to create such a mandate. Still, the issue of enforceability remains a conversation among the many legal jurisdictions in North Idaho, with Bonner County taking a firm stance as non-enforcers.

The city of Sandpoint differs in its approach to enforcing the mandate, though the emphasis will remain on education, according to city officials.

She added that Sandpoint Police Chief Corey Coon has already communicated with his officers and met with city leaders on a near-daily basis, determining that SPD has “leeway in our approach to enforcement.”

No matter what, that’s going to be an uphill struggle.

“The challenges with enforcing even the governor’s orders around the COVID-19 restrictions [reverting the state to a modified Stage 2 of the reopening plan, limiting gatherings to 10 or fewer individuals, yet allowing bars, restaurants and churches to remain open], there’s exceptions built into this that make it more challenging for local jurisdictions to enforce,” Stapleton said. “The exemptions make it difficult to enforce, but that doesn’t make it unenforceable.”

The upper limit of enforcement by police would be a $1,000 fine and jail time for those who refuse to comply with the mask order — whether they be individuals or business owners. The former may be booked on charges of trespassing, the latter facing a potential citation.

However, officials hope it will never come to that.

“The intent with the city over the next 30 days is not to be heavy handed with this, and instead focus on education and hope people are staying informed and on what they can do to protect our health care system,” she said, noting that the “education” approach will be reassessed after 30 days.

Rognstad put a finer point on the position in which the city finds itself regarding enforcement of the mask order: “[W]e’re basically forced to enforce this law which is, on its face, not enforceable.”

That position is made even more difficult by the county’s intransigent stance, not only opposing the usefulness of the health district order, but vowing to openly defy its application.

“You see this time and time again, across issues,” he said. “I think it’s irresponsible that the sheriff has taken this stance as well as the commissioners. …

“This topic has become really politically charged, unfortunately, which makes no sense,” Rognstad added. “I’m only concerned with public health. Why the county doesn’t appreciate their responsibility in that role, I can’t explain that. I think it’s just another example of how issues across the board have been politicized through this election cycle and period of history we’re in right now, which is unfortunate because real people are suffering, real people are dying.”

Councilman Joel Aispuro, who has been the most vocal opponent of any mask order — whether from PHD or the city — said that while he objects to anyone being on the hook for a fine or jail time for not abiding by the order, he’s on board with the education approach and trusts local law enforcement to make the right calls, if and when they need to do so.

“Sympathy and empathy will go a long way in these days,” he said. “I’ll leave that to Chief Coon and his guys and Ponderay, and other counties. …

“I believe education is very important, and I believe we have a very trustworthy police department and I trust that they know what they’re doing,” he added. “I think it’s a balancing act.”