When Robb Talbott and his wife, Tasha, launched Mattox Farm Productions in Sandpoint five years ago, the mission was simple: host live music from quality artists at feel-good, family-friendly shows.

Since Mattox Farm’s inception, Talbott has done just that, hosting events in more than a dozen local venues throughout every season, including the free Sandpoint Summer Music Series in Farmin Park and the annual Jack Frost Fest winter celebration. In addition to putting on these events, Talbott said he has always hoped to find a location where Mattox Farm could “curate a space that focused on the performers and was safe for all people.” Essentially, Talbott wanted his creation to find a home. 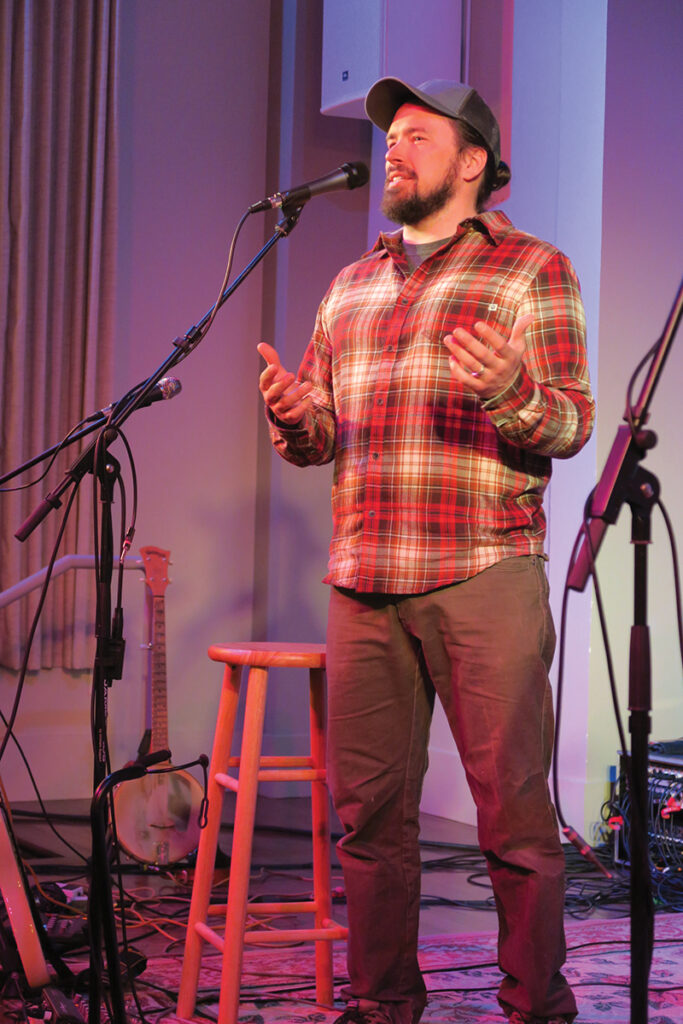 Robb Talbott speaks at the Heartwood Center in 2019. Photo by Lyndsie Kiebert-Carey.

This week, as Mattox Farm Productions marked its fifth birthday, the Talbotts announced that a home for their project had been secured: the Heartwood Center, located at 615 Oak St. in Sandpoint. Mattox Farm will take over management of the venue in July.

“To be completely honest, it’s beyond a dream come true,” Talbott told the Reader.

The Heartwood Center, dedicated in 1908 as St. Joseph’s Catholic Church, underwent a massive renovation completed in 2014 and has since served as a venue for all kinds of events, including weddings, conferences, plays and live music. The space has been pretty quiet during the pandemic era, and most recently hosted the Sandpoint Waldorf School. Starting in July, Talbott will take over management responsibilities, and the space will remain open to a variety of events.

“When I started out on this adventure I had no idea where it would end up,” Talbott said of Mattox Farm Productions. “My hope was to run a music venue one day; but, to be honest, I didn’t know if the community wanted that, too.

“Over the last five years it has become increasingly obvious that there is room for a reliable space that is about music, theater and community-focused events that are family friendly and affordable,” he added.

Named for Talbott’s family farm in the foothills of the Appalachian Mountains, Mattox Farm Productions has been bringing music of all genres to Sandpoint and the surrounding area since 2017, always with an emphasis on the power that live music has to unite the community. Talbott has been instrumental in booking nationally touring bands at area venues, as well as elevating the work of local artists by giving them more opportunities to perform.

With a dedicated home at the Heartwood Center, the possibilities for Talbott’s project are only growing.

“Mattox Farm Productions will be moving into the Heartwood Center this July looking to create events that support the local performing arts community in addition to bringing in talent from around the country and the globe,” Talbott wrote in an April 20 news release. “And as always, there will be a focus on making these events family-friendly and inviting to all.”

To follow events happening at the Heartwood Center starting in July, find Mattox Farm Productions or the Heartwood Center on Facebook and Instagram. Also visit mattoxfarm.com and heartwoodsandpoint.com. Those interested in renting the Heartwood Center for a performance, business conference, wedding or other community-oriented event later this summer can contact Robb Talbott via email at [email protected]