From perp to priest

Panida hosts virtual screening of Corpus Christi, the story of a criminal who stumbles into priesthood

The Panida Theater is continuing its Virtual Viewing Rooms series by screening Corpus Christi, a Polish drama about an ex-con accidentally turned priest. 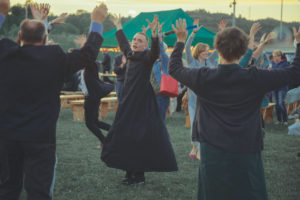 The Panida will offer virtual screenings of Corpus Christi Friday, April 24 through Thursday, April 30. The film will be accessible from home with a $12 purchase to benefit the theater.

Corpus Christi follows 20-year-old Daniel, who undergoes a “spiritual transformation” while living in a youth detention center. Though he wants to become a priest, his criminal record makes it impossible. Daniel is sent to work as a carpenter in a small town, and after telling a lie, becomes the priest of the local parish. Despite the comedy of errors that leads to Daniel’s position of religious leadership, he might be just what the community needs.

Corpus Christi has been acclaimed for how it balances poignant darkness with a sense of humor and hope. It earned 11 Polish Academy Awards — including Best Film — and was nominated for Best International Film at the 92nd Academy Awards. The film boasts a 98% approval rating on Rotten Tomatoes, and lead actor Bartosz Bielenia has earned rave reviews for his intense and moving performance as Daniel.

“If Oscars were decided according to the speed with which voters flipped out when they stared into the eyes of the principal character, Corpus Christi would be an easy winner,” wrote a reviewer in The New Yorker.

Next, the Panida will offer screenings of Supa Modo, a foreign language film that tells the story of terminally ill 9-year-old Jo, who dreams of becoming a superhero.

To access the Panida’s virtual screenings, go to panida.org and click the “tickets/events” button at the top of the page. Streaming costs $12 and films can be viewed anytime during the 72-hour period following payment. All proceeds benefit the Panida.