The Duke Evers Band is on a roll.

Over the past few months, the Seattle-based indie rock trio has tackled frequent tours and the recording of their first LP. According to Joshua Starkel, singer and guitarist for that band, it’s been a long road working out their style and collecting a following in Seattle. But with an album on the way and a partnership with a record label secured, 2016 is shaping up to be a landmark year for the Duke Evers Band. No less auspicious than their first album is their first performance in Sandpoint, set for Friday evening at the Panida Theater. 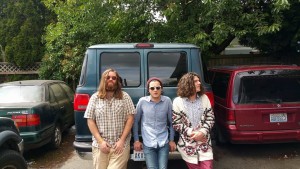 “This will be the first time any of us have played in Idaho before,” Starkel said. “[My bandmate] Kyle was the one that reached out to the theater—we’re trying to play shows and test the new record.”

To hear them describe it, the Duke Evers Band “arrived on this planet to combine power riffs with sly licks and good looks.” True to form, the band combines the catchy energy of their music’s bluesy pop melodies and rock ‘n’ roll spectacle with a winning stage presence. It’s a dynamic Starkel takes seriously, and one that usually leaves a strong impression on audiences.

“People can see how genuine it is, and it’s very infectious,” said Starkel.

With Starkel on guitar and vocals, Kyle Veazey on drums and vocals and Dune Butler on bass and vocals, the musicians pack a lot of sound into their three-person outfit. According to Starkel, the band has a fluid style very much inspired by their musical obsessions of the time. Bands like Tame Impala and Queens of the Stone Age propelled the trio as they wrote and recorded songs for the forthcoming album.

The recording process itself was the sort of breathless experience that no one in the band quite anticipated. Whisked down to a recording studio in San Diego, the trio pounded out 12 original songs and two covers in a matter of days. From morning until evening, the band subsisted on music.

“It was a lot of fun—our hotel connected right to the recording studio, so we’d wake up and record all day,” said Starkel. “It was definitely a different vibe down there, which I think influenced some of the songs.”

Carving out a space within Seattle’s busy music scene is no easy task, but the Duke Evers Band has earned its following. All three members come from towns outside the Washington city but relocated to pursue their musical ambitions. After participating in a few projects that fizzled out, the three eventually found the answer they sought in the Duke Evers Band. While there’s no telling where the future will take them, Starkel said they’re excited to find out.

“You just kind of jump in if [music] is what you want to do,” he said. “We don’t really strive to be like anyone else. We just do what we do and have a good time doing it.”