Repurposing military Blackhawks for use in the civilian world

Capitalizing on the availability of surplus military helicopters, a local firm is currently  “demilitarizing “ the revered Sikorski UH-60A Blackhawk—tailoring it for a number of civilian heavy-lift utility missions.

Timberline Helicopters, Inc., which has called Bonner County home since 2007 and is located at the Sandpoint Airport, is stripping the Army’s troop-carrying helicopter of  600 to 700 pounds of military wiring, installing new avionics and electronics and replacing Army green with a new bright blue paint job. 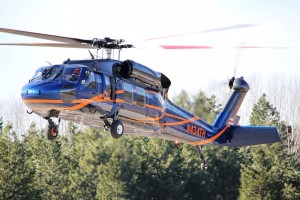 A Blackhawk helicopter owned by Timberline that has been successfully repurposed. Photo courtesy of Timberline.

The renovations are designed to equip the former war bird for multi-mission civilian roles including fire-fighting, transmission/utility line construction, cell phone and ski-lift tower placements and other heavy-lift operations throughout the western United States.

After working with the Federal Aviation Administration for ten months, Timberline announced last February that the FAA had approved its UH-60A Blackhawk Restricted Category Type Certificate for operation in the U.S.

“We also have a growing list of modifications for the aircraft with multiple STCs (supplemental type certificates) in the works to expand the Blackhawk’s capabilities and improve its operational efficiency,” says Travis Storro, Timberline’s chief operating officer.

The company has purchased three Blackhawks from the Government Services Administration (GSA). One is finished, certified and in operation by Timberline. Another is undergoing refurbishment and certification, while yet another is waiting to be picked up near the Redstone Arsenal at Huntsville, Ala.

Storro, who previously served as certification manager and director of maintenance for the company, and Brian Jorgeson, Timberline vice president, flew the newly-certificated Blackhawk on a 21-hour roundtrip flight to Louisville, Ky., where it was exhibited at the Helicopter Association International Heli-Expo 2016.

Timberline Helicopters has 35 employees, consisting of helicopter pilots and mechanics and support staff, including field teams that support aircraft working on location. Its sister company, Timberline Logging Enterprises, has 15 employees and manages all aspects of the logging projects.

In addition to its existing 12,500-square foot hangar at the Sandpoint Airport, Timberline is adding a new 6,300-square foot hangar for the Blackhawks to accommodate its expanding business. It also is looking at upgrading cockpit electronics in the older helicopters to the newer digital  “glass” cockpits.

“But some helicopter pilots still like the older analog systems with knobs and buttons,” Storro said.

Timberline Helicopters evolved as a division of Horizon Helicopters in Laclede. It then began operations under owners Ammy and Brian Jorgenson with a Kaman K-Max helicopter used in logging operations. Moving to Sandpoint in 2010, the company has since added another Kaman K-Max, a Bell UH-1H Huey, a McDonnell Douglas (now Boeing) MD530F and a Schweitzer 300CB along with the two Blackhawks to its inventory.

To keep its helicopters flying, the company established itself as an FAA-approved repair station in 2014, allowing it to perform maintenance and modifications on all the aircraft it operates.

Storro sees a strong future in utility operations for the modernized Blackhawk. Proven in more than 8 million hours of operation for the U.S. Army and other military and paramilitary fleets, the 36-year- old Blackhawk can lift 8,000 pounds and cruise at 145 kts. (the K-Max, for comparison, lifts 6,000 lbs.).

Built for reliability, the twin turbine-powered Blackhawk has three electrical systems and dual hydraulic systems and has the capability to perform Medivac and other special missions.

To handle its current and expected growth, Storr said “we need to hire more people.”

He said the company has had to hire people from Washington and Montana and that some workers drive from Post Falls or Coeur d’Alene every day.

“One of the challenges we face being based here is the shortage of qualified personnel to support maintenance operations,” said Storr. “There are very few people with Blackhawk experience, avionics experience or aircraft maintenance experience.”

For more information about Timberline Helicopters, go to www.TimberlineHelicopters.com.