Remember when food trucks used to be places where you were afraid to eat? You would find them parked on dark city streets, grease traps overflowing and a perpetual funky smell surrounding them. My, how times have changed. 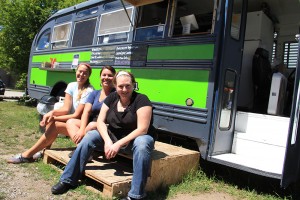 In the past ten years, the American food truck has gone from roach coach to gourmet cultural phenomena. According to mobile-cuisine.com, the mobile food industry has shown consistent growth for eight years straight, with over $1.2 billion in annual food truck revenue recorded for 2015. With good reason, too, since some of the best cuisine that I’ve eaten over the past few years invariably comes from a truck.

Sandpoint has embraced mobile gourmet as well, with a food court popping up on Oak Street across from Farmin Park, and a collection of food trucks at the Evans Brothers/Granary parking lot.

The newest kid on the block is Beet and Basil, located right smack dab in the middle of the Granary parking lot, between the Granary building and the warehouse. You can usually smell the delectable flavors from a block away. Follow your nose—it won’t lead you astray.

Beet and Basil is the brainchild of Jessica Vouk, head chef at Spud’s Waterfront Grill. Besides working full time at Spud’s and raising a family, Vouk decided to take the food truck industry by storm last month with the opening of Beet and Basil.

Vouk’s inspiration came after missing the global food she was eating while living and working as a chef in Seattle: “I missed a lot of the food I could get in Seattle. I wanted to go for a global flavor, local flair type of thing where we offered street food from around the world and make it healthier. We use a lot of organic ingredients.”

The menu at Beet and Basil is influenced by the worldly cuisine Vouk has been inspired by during her career as a chef. There are cuisines from all over the world on her menu, which evolves weekly. There’s the Vermicelli Bowl, which features organic fresh greens, vermicelli noodles, cucumbers, pickled diakon and carrots, mung beans, noc chom dressing and chicken or tofu. Or the Beet Ball Wrap, featuring fried beet fritters, tomatoes, feta cheese, fresh greens, slaw, lemon vinaigrette, harissa aioli and a flour tortilla.

While some items will remain, there will always be one or two new items every week, so keep checking back to see what new wonder Vouk has cooked up for us.

My favorite is the Bahn Mi Sandwich, which comes with chicken or tofu on a rustic French roll with mayo, Sriracha, hoisen, slaw, cilantro, pickled daikon and carrots and jalepeños. But then again, I’ve only just begun to go through the menu.

For Vouk and business partner, Kylee Rodriguez, the aim is to offer healthy menu choices that don’t seem healthy at all at first bite.

“We’re really big on using meat as a flavor, but focusing on the veggies,” said Rodriguez, whose portion of work includes social marketing and fraternizing with the customers. “Jessica makes all her own sauces, too, and they’re so good.”

At first glance, you might just fall in love with the truck Vouk and Rodriguez picked out.

The bus was formerly owned by an interpretive ballet troupe from Moscow before being sold to a man in Libby, Mont., who took his family traveling in it. From there, it was sold and used for a gourmet food truck French cuisine Portland, Ore. before being purchased again by Penny’s Pit Pub & Grill in Rathdrum. It was from Penny’s Pit that Jessica purchased the truck.

“It was already set up as a food truck, but we had to gut it completely and start from scratch,” she said.

Vouk’s husband, Jeremy Holzapfel, designed the logo and family friend Cole Tonnemacher painted the truck along with a handful of other crucial tasks.

“It’s funny, we invited everyone over for a BBQ in our backyard for beer and tacos,” said Vouk. “Once they were all there, we lured them into helping us hoist this 1,000 pound oven into the bus.”

While there aren’t many locations in Sandpoint that allow mobile food trucks, Vouk and Rodriguez feel lucky to be in the Granary parking lot.

“We picked a good spot,” said Vouk. “We’re right next to Evans Brothers. They have a great parking lot community. And there’s [fellow food trucks] Jupiter Jane’s and Soul Picnic nearby. It’s a fun parking lot.”

Beet and Basil is located in the Granary parking lot (right next to the “before I die” signs) and is open Tuesday through Saturday from 11 a.m. to 4 p.m. You can eat on their grassy patio, or order food to go. 208-304-9470. Also, check out their Facebook page to see weekly changes to the menu.