AquaGem Jeweler’s journey to Sandpoint started in the Philippines

The road to Sandpoint for AquaGem Jewelry co-owner Angelito Marapao began in the Philippines. 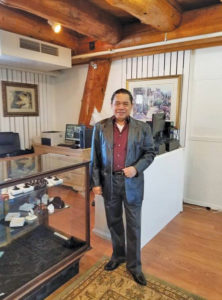 Angelito Marapao in his new shop at the Bridge. Courtesy photo.

A 13-year-old just starting to learn the craft of jewelry, he could never have predicted that the next several decades would take him to a new country and eventually to a new home in North Idaho. But together with his wife, Theresa Drake, they are working to set up not just one, but two jewelry stores in Bonner County. The couple intends to take ownership of the well-established Sayers Jewelers in the summer while also operating the recently-opened AquaGem Jewelry in the Cedar Street Bridge.

“I want this store to be the store that can compete with jewelers in Spokane and Coeur d’Alene,” Marapao said.

With 50 years of jewelry experience under his belt, Marapao works in silver, gold and platinum. He has a knack for jewelry repairs that other professionals find impossible and is able to work jewelry in his own unique style. AquaGem also aims to showcase the work of local jewelry artists, giving a platform for the community’s jewelry artisans.

Marapao learned the jewelry craft at 13 years old, apprenticing himself at his aunt and uncle’s store in an effort to learn a useful trade and build a better life for himself. He picked up everything the store’s jeweler knew within a week, and by 16 years old, he was the top jeweler in the store. Marapao’s talent for the craft eventually took him to Manila, the capital of the Philippines, where he oversaw a large jewelry business.

Despite a successful life in his native country, his father eventually convinced him to move to California, where the 37-year-old Marapao found work waiting tables. He longed to return to his chosen vocation but faced discrimination for his background.

Eventually, he decided to travel to Las Vegas with only $1 in his pocket. Marapao believes it was serendipitous that just when he was about to despair of ever finding work, he turned around to find a jewelry store with an owner willing to hire him. His employers sent him to school to become a certified gemologist, an opportunity that eventually led to him taking ownership of the store, located in the Riviera Casino. During this time he worked for the occasional celebrity client, including then-heavyweight champion Mike Tyson.

When the economy went bad in 2008, tourism to Las Vegas dried up, and Marapao decided to sell the store and move to Texas. He met Drake in Austin 10 years ago while working as an independent jeweler, and together, they decided to pursue store ownership once again. They learned that the owner of Sayers Jewelry in Ponderay intended to sell the business, and they struck up an agreement to buy the business.

The AquaGem opportunity was somewhat unexpected, although it was always Marapao and Drake’s intention to open a second store. When they noticed that space was available in Cedar Street Bridge, however, they couldn’t resist snapping it up. They believe that AquaGem will be complementary to Sayers Jewelers, which will focus primarily on its existing clients.

“The feedback (for AquaGem) has already been pretty great so far,” said Drake. “We’re finding Sandpoint to be very welcoming.”