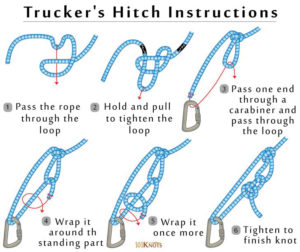 My shipmate on the Atlantic crossing (Gary Quinn) taught this one to me. It’s one of the most functional knots around, actually. The trucker’s hitch is great for securing loads, as you may have guessed from the name. When tying a trucker’s hitch, you form a crude block and tackle in order to add tension to a line. There are a few variations of this knot, but this method is widely accepted.

1. Make a loop and pass the rope through the bight.

2. Hold on either side and pull the loop to tighten. This will form a fixed loop.

3. Pass one end of your line through a carabiner (or whatever you are fastening the line to) and then pass through the loop on the line.

4. Pass the end through the standing rope twice and tighten it to finish the knot.*

5. You’ve tied yourself a trucker’s hitch.

*You can finish the knot with the taut-line hitch (you’ll learn that one next) if you need to adjust the loop. 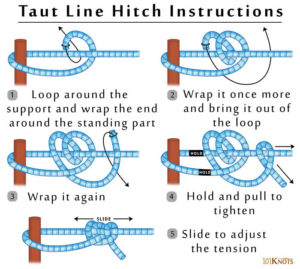 The taut line hitch, like the trucker’s hitch, is a functional knot for lines under tension. It’s often used to set up hammocks, securing guy lines to tents and tying down objects which may need their line adjusted periodically. Also known as a tent-line hitch, this knot slides freely but jams under load making adjustments simple.

1. Loop around the support or object you are tying to and wrap the bitter end around the standing line.

2. Wrap the end around once more and bring it out of the loop.

3. Wrap the end one more time around the standing end.

4. Hold near the support and pull the standing end and bitter end to tighten.

5. You can slide to adjust the tension. 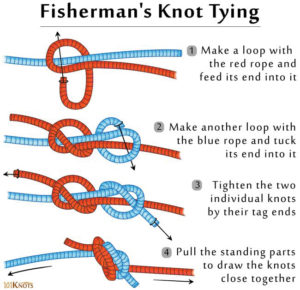 Many of you may have learned this useful knot when you were young and learning to fish. It’s a great knot for joining two lines, but you can also use it to connect the ends of a single length of rope to form a loop. The fisherman’s bend is great for tying small diameter twines and strings, especially fishing lines, but it can slip when tied in slippery lines such as nylon monofilament. This knot jams when tightens, which is advantageous for fishing purposes).

1. Make a loop with one line and feed the end into the loop over-under (see red rope in diagram).

2. Make another loop with the other line (blue in the diagram) and tuck its end into the loop over under.

3. Tighten the two individual knots by their bitter ends.

4. Pull the standing parts of the line to draw the knots close together. 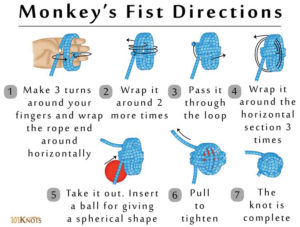 Also known as a monkey’s paw, the monkey’s fist is a knot tied at the end of a rope to serve as a weight. The name comes from the fact that when tied correctly it resembles a monkey’s fist. This knot is functional if you need to heave a line a long way. It can also be used as a weapon if you need to thump someone in self defense on the high seas. Fun fact: Because this knot was often used to toss a line from one ship to another to bring them together, the knot symbol has been used in the hobo community to denote solidarity. It’s a pretty sweet- looking knot.

1. Make three turns of the line around your fingers and wrap the rope end around it horizontally.

3. Pass the end through the loop.

4. Wrap the end around the horizontal section three times.

5. Insert a weighted ball (such as a marble or ball bearing) to give it a spherical shape (and to add weight).

7. You’ve tired yourself a monkey fist.