Cornhole tournament set to take over First Ave. this weekend

Back after a successful inaugural event, the Sandpoint Cornhole Classic tournament will take over historic First Avenue in Sandpoint on Saturday, Sept. 14. The tournament is co-presented by MickDuff’s Brewing Co. and A&P’s Bar and Grill — both hotspots for Sandpoint cornholers. 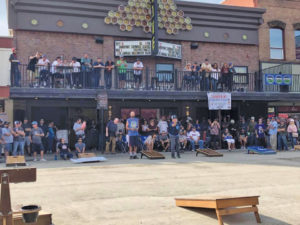 The tournament is an American Cornhole League Mountain North Conference Tournament, meaning the event is open to 11 western states. Last year, more than 100 players competed, but this year already 150 have signed up, including a dozen professionals.

Cornhole has experienced a rapid rise in popularity around the country, especially in Sandpoint. There are even two professionals in Sandpoint right now; James Mize of A&P’s and Ryan Huffey.

“It’s huge right now,” Mize said. “Our [Facebook] group, Sandpoint Idaho Cornhole, has almost tripled in size. It used to be just three or four of us playing on Tuesday afternoons, now 18 to 20 people show up every week.”

Last year’s tournament was unique in that it took place right in the middle of First Avenue, with players tossing bags from one side of the street to another.

“It’s super cool that the city of Sandpoint is allowing this,” Mize said. “We go to other places and we’re playing in an old gymnasium or warehouse or furniture store. We get to enjoy playing right here in our beautiful town.”

Because First Avenue will be closed to traffic from Main Street to Church Street due to construction, the city is also allowing consumption of alcoholic beverages during this year’s cornhole competition.

“The whole First Avenue will essentially be a beer garden,” said MickDuff’s Manager Mack Deibel. “You can drink on First Avenue, but you can’t bring your own alcohol.”

Deibel said play will also be broadcast on the ACL Digital Network thanks to Northland Cable. To stream, visit iplaycornhole.com.

Players will compete for $10,000 in guaranteed cash prizes spread across different divisions, with a $1,000 guaranteed first-place prize for advanced singles and advanced doubles. Each division is separated into social, competitive and advanced skill levels. That means everyone from the casual tosser to the professional can find a match.

Registration is only $20, which includes one drink. Registration will end Thursday, Sept. 12 at 10 p.m., so don’t wait until the day of the tournament to sign up.

Along with the 150 expected competitors, Mize said more than 1,000 spectators will likely show up, bringing an economic boost for downtown Sandpoint — all the more important since much of First Avenue is torn up for construction.

There will be food provided by A&P’s, as well as other restaurants along First Avenue.

“This sport is growing,” Deibel said. “It’s blowing up. The goal is to keep growing the sport, make it a year-round thing. We want to make Sandpoint a destination for cornhole.”

There will be a Friday night social and kick-off at MickDuff’s Beer hall on Friday, Sept. 13 starting at 5 p.m. The format for players will be a Crew Cup competition, which players must register for before the Sept. 12 deadline. Check-in starts at 8:30 a.m. for singles on Saturday morning with first toss at 9 a.m. Check-in for doubles begins at 12 p.m. with bags flying at 1 p.m. To register or for more information about the Sandpoint Cornhole Classic, visit sandpointcornhole.square.site.