Despite protests by mask opponents, library board holds to face-covering policy

Library director: ‘It shouldn’t be a political issue; it’s a health issue’

Board members of the East Bonner County Library District faced a restive crowd at their April 12 meeting, as dozens of opponents of the library’s mask policy gathered to press for lifting the requirement that face coverings be worn in the building.

The mask policy was not an action item on the board’s agenda, and members ultimately agreed to hold off on any further discussion of the issue until its May meeting — at the earliest. 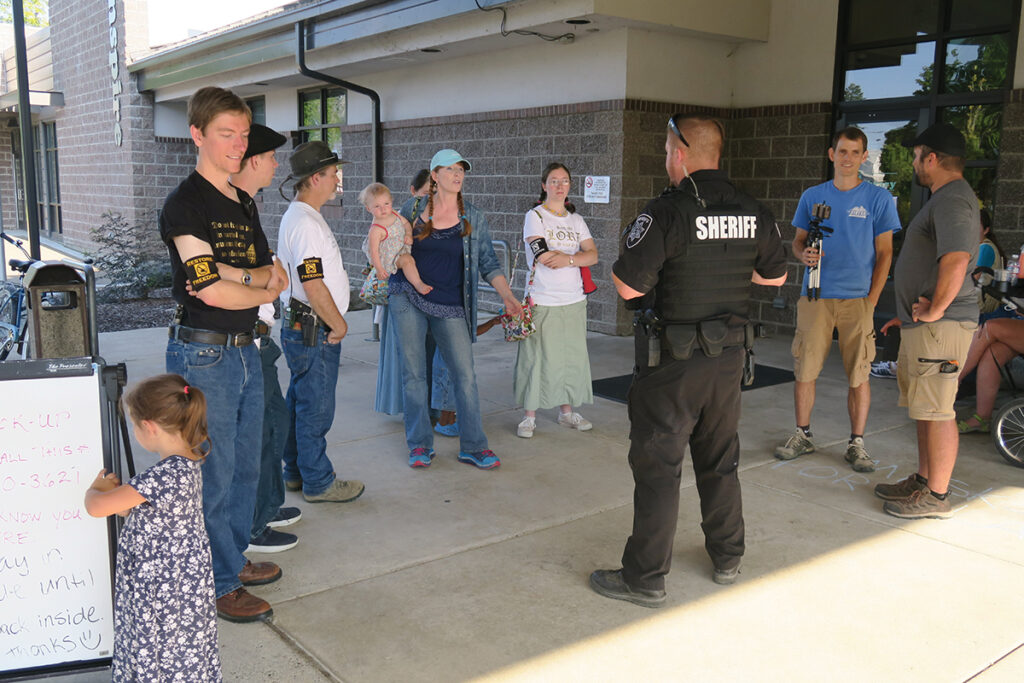 A Bonner County sheriff’s deputy speaks with anti-mask protestors who attempted to enter Sandpoint library in July 2020 without face coverings as mandated by library board policy. Photo by Ben Olson.

“My sense is that we are not in a position tonight to make any changes to our mask policy,” said Board Chairperson Amy Flint. “I need more information before I can make an informed decision on the mask policy.”

Yet several speakers expressed their views, including Rob Hooper, who claimed that as a public entity, the library district lacks “the technical basis to make the call to say, ‘Hey, we want to carry this [policy] on.”

Another speaker, who gave his name as Jon Anon, said that while he had once been proud of it, “now I’m ashamed of this library.”

He went on to refer to a “political partisan influx” that has turned the library into “the inverted reverse” of its purpose — claiming that the continuation of the mask policy is tantamount to “burning the books as well as people’s freedom of speech and freedom to breathe.” He later referred to the novel coronavirus as a “Chinese bioweapon.”

Other speakers emphasized claims that face coverings do more harm to health than good — “The science is there,” said one man identified as Robert R., an opinion echoed by another speaker who gave his name as Russ and who argued mask-wearing “should be totally voluntary.”

Tempers flared among some.

“You’re taking my health in your hands and you have no idea what a mask is doing to my lungs,” said one speaker identified on the sign-up sheet as GIP.

“Why are you taking control of a situation you have no authority in? It’s bullshit,” he added, his voice rising, “and besides, I don’t give a shit about it. You guys are so scared, you’re all driven by fear.”

The board heard from several more speakers, including Jalon Peters and Kathy Rose, both of whom are running for seats on the library board in the May 18 election.

Peters claimed that the mask policy is unconstitutional, as well as opposed to liberty, science and ethics.

“It’s impossible to have collective liberties without personal liberties first,” he said, going on to claim that while not enumerated in the library’s official mission, it is the role of the institution to “promote morality and love country” — both of which are “being attacked in our culture.”

Rose followed, stating simply, “This mask policy needs to be terminated tonight and you can do that. That’s it.”

In a follow-up interview April 14 with the Reader, Library Director Ann Nichols said, “I’m just amazed that this has even been an issue. I would have hoped that people would have helped each other rather than being selfish and self-centered, but other people have other opinions.

“It shouldn’t be a political issue; it’s a health issue, and that’s how the library views it,” she added.

During their April 12 meeting, board members keyed in on the idea of health safety — not only for patrons but staff members.

“The pandemic is not over, there are increasing cases, there’s variants and I think the staff should be allowed to be fully vaccinated — if that’s their choice — before we can be fully open,” Flint said.

Nichols said library staff’s experience with mask opposition, which has featured several protests since summer 2020 — including at least one with direct connections to the People’s Rights organization fronted by headline-grabbing southern Idaho-based anti-government activist Ammon Bundy — has been universally unnerving.

“It’s just been so distressful,” she said. “The worst part has been people coming in who don’t approve of masks and really taking it out on the staff.”

According to Nichols, beyond the several organized protests, library employees have been subjected to routine name-calling and verbal abuse — sometimes to the point that they are reluctant to come to work.

“I just wish people would be nicer,” she said. “We don’t claim to be [medical experts] and so we’re listening to the experts. …

“Nobody likes to wear the mask,” she added.

Other board members noted various petitions, emails and other messages received in recent days expressing opinions both for and against the mask policy.

Referring to a petition signed by more than 300 individuals opposed to the policy, Boardmember Joan Terrell said, “We do know that we have many, many citizens, library patrons, who want a change.”

At the same time, Nichols, said, the library has received “hundreds and hundreds” of other messages expressing support and appreciation for the policy requiring face-coverings — “It’s a vocal minority [that opposes the policy]. … I’ve been getting emails from actual library users and they are very supportive.”

She, as well as the board, noted that despite the mask rule and other pandemic challenges, the library has managed to continue its offerings throughout with curbside and online services, neither of which necessitate face coverings.

While the board declined to make any decision regarding the mask policy — though at several points being interrupted with the angry chant of “take a vote” and one man shouting “stop being tyrants” — members did agree that the 72-hour quarantine on returned materials should end, based on current research showing surface contact isn’t as big a concern as it once was related to COVID-19 transmission.

Meanwhile, Nichols said, “The mask mandate to me is very similar to, ‘Wear shirts and shoes for service, or don’t smoke in the building’ … But they’re calling it a constitutional thing that they don’t support. They think it’s unconstitutional but it isn’t. Libraries can set their policies when it comes to health.”