Whether 50 feet of shoreline in Camp Bay stays open to the public is scheduled to be decided by the Bonner County commissioners on Wednesday, Feb. 16.

The commissioners were court-ordered to revisit a decision that gave away Camp Bay Road and 50 feet of waterfront to a developer. County officials dispute that the road provides public lake access. 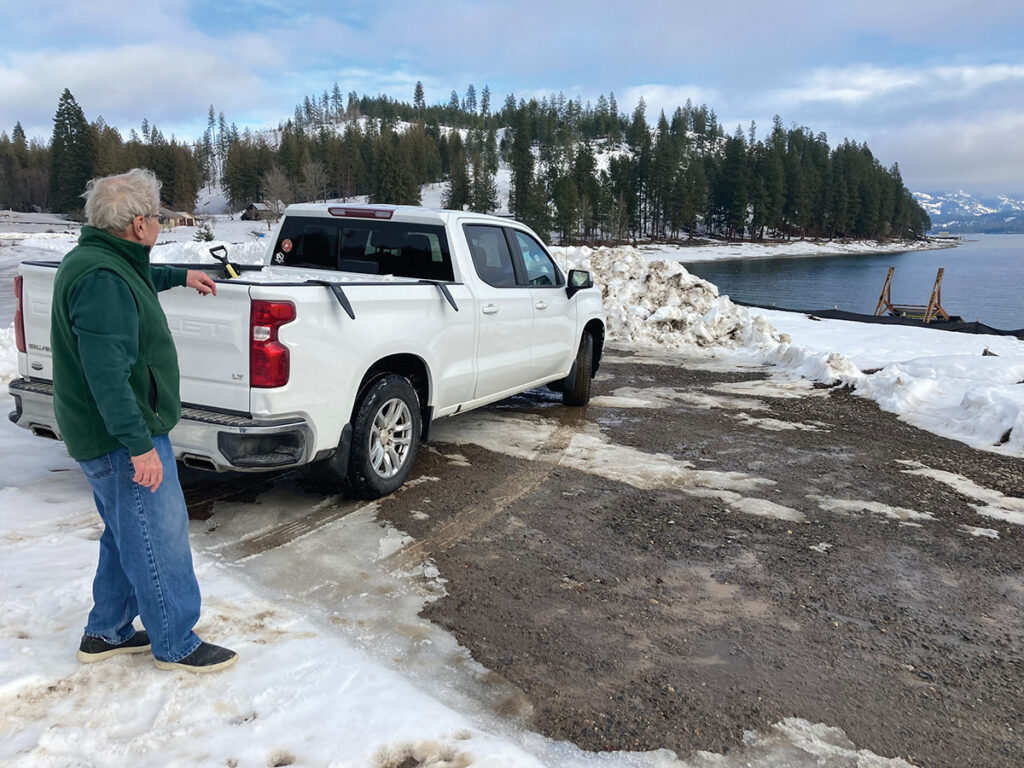 Area residents are organizing a Camp Bay Beach BBQ event from noon to 2 p.m., Saturday, Feb. 5, to raise awareness about the issue.

“It seems the county was able to give away a public beach because most people didn’t even know about it,” said Doug Gunter, a Sagle-area native. “We don’t want that to happen again.”

The commissioners agreed in April 2021 to abandon 2,550 feet of Camp Bay Road to Green Enterprises, LLC, arguing it was in the public interest because the county would no longer have to maintain that portion of road.

The over century-old county road ends at the shore of Camp Bay, where fishermen once brought their catch to shore and the Northern Steamboat would stop for passengers, mail or deliveries when signaled by a flag.

John van Schravendyke’s family homesteaded Camp Bay and petitioned the county in 1908 to dedicate the public road. His daughter Jeanne inherited the property, and leased cabin lots to vacationers.

In recent years, some area residents were unsure of the status of the beach, because the Greens would sometimes chase people off. More recently, realtors are doing the chasing.

“I walk down to the beach all the time. The last time I walked down there, I was run off by the realtor and told I was trespassing,” Krista Aman Widgren posted on Facebook. “He threatened to call the police.”

“Somewhere I read my grandmother writing about butchering a cow and that they only had two gunny sacks so the cow would have to be sent to Sandpoint over a two-day period,” he said. “They hoped the captain would return the empty gunny sacks on his way back to Bayview, so they’d have them in order to send the next half into Sandpoint.”

“I can’t imagine any planet where denying access to the lake for the public is in the public’s best interest,” Fred Arn said during a recent interview on The Voice podcast.

Despite evidence that the public right-of-way ended at the high-water mark, confirmed by the recent court decision, the county planning staff stated in their staff report that there was no public lake access. Commissioner Dan McDonald repeated that claim on Facebook.

“The fact is there is ZERO public lake access where it was claimed to be,” McDonald wrote in a Nov. 21 exchange on the Bonner County Discussions Facebook page.

But the Green Enterprises application did not shy away from the fact, arguing that it was in the county’s interest to give up the shoreline because it would be too expensive for the county to develop the site for recreation and area residents could get to the lake in Garfield Bay.

Not long after the county decided to vacate the public right-of-way, the county commissioners also agreed to spend $830,000 to pave Camp Bay Road to the proposed gated community.

Since then, the bulldozers have been building roads at Camp Bay.

M3 ID Camp Bay LLC, an Arizona development company, purchased 407 acres in the bay, with 3,000 feet of waterfront, from Green Enterprises for $13.5 million, according to Randy Green. Phase 1 of the project will have 22 lots and five common areas.

The upland lots are selling for $790,000 to $1.09 million. The smallest waterfront lots (just over two acres) are almost $2 million each. The common lots include a community center and community dock, recently approved by the Idaho Department of Lands.

The next phase of the project is proposed to have 15 homesites (yet to be approved by the commissioners) and a common area bordering National Forest lands.

Like much of the public, Zelma Brisboy, who grew up in Camp Bay, was caught by surprise by news of the road vacation.

“We swam together, helped cook for the hayers,” she wrote to the Daily Bee in December. “Never a thought about the road being private. It wasn’t and should not be private. If they want to gate something, they can. Gate the development.”

The elder Green won a controlling interest of Green Enterprises after his parents died, and he won a lawsuit brought against him by his younger brothers and sister. His siblings claim he tricked his parents into giving him all their shares in the family enterprise and that their mother, Jeanne, wished the land to be conserved.

At the April hearing, Gary Green tried to discuss a conflict of interest issue — that Steve Klatt, then head of the Road and Bridge Department (since retired), was also a principal in Green Enterprises. He was silenced by Commissioner McDonald, who stated the comment was “not relevant.”

Klatt did not submit any comment for or against the road vacation. However, the planning staff interpreted his silence as tacit approval.

The findings of fact in the county’s decision stated the vacation was in the public interest because, “No public agency or neighbors have objected to the proposed vacation.”

County Planning Director Milton Ollerton said that it’s the department’s policy to assume consent if no comment is provided and that he was unaware that Klatt had a conflict of interest at the time.

While county officials have argued that Klatt had recused himself from the issue, in an email exchange between the Planning Department and Brad Marshall of JUB Engineering from Feb. 2, 2021, Marshall states, “Alex Brownlee of M3 and Jim Green have had several discussions with Steve Klatt of Road and Bridges, and Milton [Ollerton] about vacating the end of Camp Bay Road. Steve is favorable since the road is a dead end and it would be less road for the County to maintain.”

While agencies were largely silent, a number of neighbors objected in letters to the county. One neighboring property owner’s attorney, Toby McLaughlin, submitted a letter that points out that the original dedication of the county road — contained in a viewers report — extended the right-of-way to the shoreline.

“This right-of-way allows the public to access the lake at Camp Bay, which is not an insignificant resource to the public,” McLaughlin wrote, adding that any perceived public financial benefit may be negated by the county taxpayers paving the Camp Bay Road to the proposed gate.

McDonald claims that the road easement stops at the Green’s northern property line, but McLaughlin disagrees, noting that the map with the road dedication clearly shows the termination of the easement at the waterline, which was prior to the construction of Albeni Falls Dam. The dam raised the ordinary high-water mark, meaning the existing public right-of-way would extend well down into the current lakebed.

At the hearing, the Arns argued it was not in the public’s interest to vacate the road.

“People used to ride their bikes down there,” Fred Arn said. “People have gone down there as individuals or groups forever. Locals used to catch the ferry and go to Sandpoint. It’s not replaceable.”

After the decision, the Arns filed a motion for reconsideration, to which the county did not respond, so they took the county to court, won, and were awarded attorney’s fees.

But the matter isn’t settled yet.

The District Court remanded the decision back to the commissioners, who now must find new justifications for why vacating the road is in the public’s interest.

For more details about the Arns’ fight to save the public shoreline, visit their website at 50feet.net. For information about the Camp Bay Beach BBQ, search under “Events’’ on Facebook.

Susan Drumheller is a former Spokesman-Review reporter and editor, and a board member of Project 7B, a local nonprofit with the mission to support land use planning based on locally shared values and aspirations. More information is available at project7b.org.