Candidates cover the issues at forum

Nearly 200 people turned out for a candidate’s forum Tuesday night at the Sandpoint Library, where more than a dozen hopefuls for public office asked for citizens’ votes.

Among the many issues discussed during the forum, the proposed Newport smelter provoked some of the most animated discussion. With widespread opposition to the project organized in both Idaho and Washington, candidate stances ranged from a wait-and-see approach to vocal opposition. Bonner County District 1 commissioner candidates Steve Bradshaw, Republican, and Steve Johnson, Democrat, were both strongly opposed, with Bradshaw saying the land deal that provided the property for the proposed site was done illegally. 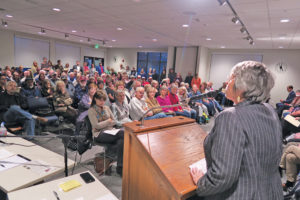 District 3 commissioner candidates Dan McDonald, Republican, and Steve Lockwood, Democrat, sparred over the issue, with McDonald saying the county’s legal team advised against taking a position until environmental impact statement data was available. Lockwood claimed McDonald hadn’t done enough to represent the county’s interests in the matter, saying that his wait-and-see approach was inconsistent to his support for the proposed Rock Creek Mine in Montana.

Rep. Heather Scott, up for reelection as District 1’s Republican representative, said that not enough is being done to evaluate the smelter’s potential impact on the area and has worked to mobilize people around the issue, sending out informational letters, seeking legal representation and contacting state officials on the matter. Likewise, her opponent, Democrat Ellen Weissman, said that she opposes the smelter and that everything she’s learned about it indicates it will be disastrous for the local environment.

Rep. Sage Dixon, also up for reelection as District 1 Republican representative, took a more moderate approach, saying he was waiting for more information to be released. In contrast, his Democratic opponent, Stephen Howlett, said he was strongly opposed, saying the plant could result in environmental problems like acid rain.

Jim Woodward, a Republican up to replace the retiring state senator Shawn Keough, said he wanted to evaluate the project with hard science but nevertheless shared concerns and had little interest to see it built in the region. His opponent, Vera Gadman, did not attend the forum.

On Medicaid expansion, up for a vote this year as Proposition 2, Woodward said that while he prefers other solutions, the Proposition 2 ballot initiative is a valid approach to the problem. Both Scott and Dixon opposed it, saying it would eventually be a financial burden for Idaho and that government had no place in health care. Weissman and Howlett supported expansion, with Weissman saying she’s met many locals who have no access to health care.

McDonald said assertions that Bonner County commissioners recently gave themselves a $10,000 pay raise is inaccurate, asserting that the county uses a third-party agency to determine average compensation for county positions and that commissioners approved raises for elected officials on the advice of the Human Resources Department. Lockwood and Johnson said a $78,000 commissioner salary is unnecessary and that they would either decline or donate the pay bump. Bradshaw incorrectly claimed the average Idaho salary for commissioners is over $100,000 (in fact, according to the 2018 Idaho Association of Counties Salary and Benefits Study, the average salary is just over $39,000, with Ada County alone having a commissioner salary over $100,000).

When asked why he did not serve out full terms for two public offices, Lockwood said he had to resign a school board position when he joined the Sandpoint City Council, which he later left due to health issues. McDonald said that whatever the case, voters could count on him to serve the full four years.

Bonner County Assessor candidates Donna Gow and Wendel Bergman both cited their experience — Gow in the Bonner County Assessor’s Office and Bergman in the private sector — as qualifying characteristics. Bonner Soil and Water Conservation District candidates Dale Van Stone and Terry McGuirk, both incumbents seeking to retain their offices, said their love for the county’s natural resources fueled their public work. Their opponents, Allen Banks and Thomas Clark, did not attend the forum.

Candidates covered many additional topics in the two-and-a-half-hour forum. To hear it in its entirety, listen to the podcast at https://www.krfy.org/podcast/ and select the most recent upload under “Other Podcasts” on the right-hand side.