A week before the Nov. 5 election, candidates for Ponderay, Lake Pend Oreille School District board of trustees and Sandpoint city office gathered Oct. 29 at the Sandpoint Community Hall to answer questions from constituents and make the case for why they should prevail at the ballot box. 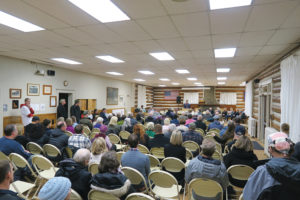 Sponsored by the Sandpoint Reader, SandpointOnline, KRFY 88.5 and Selkirk Association of Realtors, the candidates’ forum drew an estimated 100 audience members, who heard from all but two local office contenders — Ponderay City Council candidates Gary Kunzeman and Brenda Thompson did not attend.

Leading off the night were Kendon Perry and Angelo Lonzisero arguing for and against a ballot measure that could make permanent LPOSD’s supplemental levy. Perry, representing Citizens for Better Schools, underscored how critical the $12.7 million in funding is for the district: the levy supports 300 full- and part-time positions, providing them with competitive wages and helping maintain staffing so as to keep class sizes at a “reasonable level”; funds professional-technical training, curriculum development and extracurricular activities; and enables teaching tools including the district’s technology budget.

“Those are all part of that pot of money,” he said. “We’re getting a good bang for our tax dollars.”

Sagle resident Lonzisero represented the con side, repeatedly coming back to the argument that “we cannot afford these tax increases.”

“We have tax increases coming at us from every direction,” he said. “We cannot afford to make this a permanent levy that takes away any oversight that the citizens have at the ballot box.”

LPOSD trustee candidates for Zone 4 include incumbent Geraldine Lewis and challenger Tara Tribbett. Lewis, whose children went through local schools, said she would continue to bring “continuity and perspective to the district” while touting that “we’ve never outspent our budget.”

Continuity wasn’t on the agenda for Tribbet, a Ponderay resident. Rather than talk about per-pupil spending as a benchmark for educational support, she said, “This is a class issue that we’re talking about.”

As a candidate for Ponderay mayor, facing incumbent Steve Geiger, Tribbet also took aim at the proposed 1% local option sales tax on the ballot in Ponderay, calling it part of a “gentrification project” that wouldn’t benefit Ponderay residents.

If approved, the LOT would levy a 1% tax on retail sales in Ponderay, funneling the money to development of the 50-acre Field of Dreams sports facility and efforts to connect the city to the Pend d’Oreille Bay Trail, including a path beneath the Burlington-Northern Santa Fe tracks.

Geiger, who is finishing his first term as Ponderay mayor, said “I do absolutely 100% support the 1% tax.”

While Tribbet said Ponderay is a poverty-stricken city where workers have been relegated to “blue-collar serf-level wages” and “our quality of life issue … is just staying alive,” Geiger said “what Ponderay actually offers is prosperity” by way of 3,000 jobs and economic activity that benefits “our entire region.”

Tribbet vowed to “implode the city government there and start over,” and Geiger closed by saying, “Ponderay is just a really great, unique city. … I’d like to continue to be a part of that.”

Sandpoint Mayoral candidate Ken Lawrence, a recently retired pastor, said that while he’s felt current leadership “was taking us slowly but surely in a direction that I was not comfortable with,” he pledged to be “a leader who unites our diverse community and people with diverse opinions.”

Incumbent Mayor Shelby Rognstad said “the city is in an incredibly good place right now,” pointing to the strategic planning effort that paved the way for the capital improvement and master planning currently under way, and “it’s critical that we maintain the continuity of the leadership we have.”

Mayoral challenger Shannon Williamson, who currently serves as Sandpoint City Council president, agreed that “we do have a lot at stake right now,” but her data-driven approach would be best to “stay the course.”

Incumbent Councilwoman Deb Ruehle — one of five candidates vying for three seats — stressed continuity and emphasized her involvement with the current master planning. For candidate Andy Groat, serving on the council would be a chance to “answer the call to get more involved in our communities.”

Jacque Guinan framed her council rule as an attempt to find “balance” by serving as an ally for small businesses and citizens in a city government whose taxing and spending she finds alarming.

Kate McAlister, the current president and CEO of the Greater Sandpoint Chamber of Commerce, noted her many years of local nonprofit work and involvement with city issues including urban renewal. Her opening message was of collaboration: “We need to reach our hands across the aisle and talk to more people and work on more projects together.”

Finally, council candidate Shannon Mitchell, a county employee of 10 years, stressed that her prior government experience would help heal deepening divides between the city and county.

Questions came from the audience on a variety of topics, including affordable housing, turf versus grass at War Memorial Field, firearms at the Festival at Sandpoint and the city’s reputation for inclusivity.

The turf issue spurred the most contention, with incumbent Mayor Shelby Rognstad and incumbent City Councilwoman Deb Ruehle defending their decisions to vote in favor of synthetic turf at Memorial Field.

“At the end of the day it was a return-on-investment decision,” said Rognstad, who stressed that the city is in a critical time and continuity is needed to steer planning into the future.

Mayoral candidate Ken Lawrence, a former pastor, said he still wasn’t sure how he would have voted, but mayoral candidate and current City Council President Shannon Williamson was clear that she opposed both the turf decision and how it was made absent a comparative analysis with grass.

Council candidates Andy Groat, Jacque Guinan, Kate McAlister and Shannon Mitchell all echoed Williamson’s point about wanting a comparison between turf and grass. As McAlister said, “We were presented with the GreenPlay [design] and it was all turf. For me, there wasn’t a choice.”

On guns at the Festival, and the current lawsuit over the issue filed by Bonner County against the city, Mitchell, a 10-year county employee, said “this never should have come to what it has come to. The city and county should be able to come to the table.”

That sentiment was shared by most of the candidates, though with varying degrees of support for the arguments in play. Guinan characterized it as “a mistake” that the issue should go to court, but added that “I am a Second Amendment supporter and we should follow the law.”

Saying “I’m really pissed off that this is how my tax money is being spent,” McAlister, who serves as president and CEO of the Greater Sandpoint Chamber of Commerce, expressed concerns that should guns be allowed at Memorial Field during the Festival, it could threaten the event, thus damage local business.

Williamson proposed a committee of city and county officials to “work out our differences face to face, rather than in the media, because this is getting ridiculous.” Meanwhile, Lawrence said he would need “to dig in a little deeper” on the issue.

On the issue of inclusivity and North Idaho’s reputation for intolerance, Rognstad found himself defending his “social equity and inclusion initiative,” which council members removed from the FY 2020 budget this summer.

“I certainly don’t think it represents or community as a whole, but that doesn’t mean we should just ignore it,” he said, referring to instances of discrimination and racism. “This is a problem, however small it may be, and it has the potential to impact our community.”

Lawrence characterized efforts such as the inclusion initiative as “a solution looking for a problem, and I disagree with the way Mayor Shelby has handled that whole situation and I believe it causes more division than it helps.”

Williamson agreed, saying, “If I felt like this city was full of white nationalists, I wouldn’t raise my family here.” Rather, the initiative, which was included as an $8,000 line item in the budget, was removed because its purpose and function were too vague.

The other candidates decried discrimination and intolerance, though agreed that day-to-day actions, rather than city policy, are more potent in combating hate in the community.

“You can’t legislate kindness,” Guinan said, while Groat added, “We can do better than training, we can be good neighbors.”

To watch the full Oct. 29 candidate’s forum, access a recording by Idaho News Report at bit.ly/Forum-INR.