The Hottman Sisters to play show at 219 next week

Pop music has come a long way since New Kids on the Block. 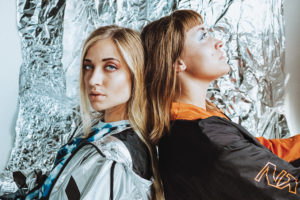 Jessica and Heather Hottman of the Hottman Sisters. Photo by Carley Scott Fields.

Once considered overly saccharine and commercial, the evolution of pop in recent years has seen the introduction of some revolutionary new bands and sounds merging raw elements into brand new genres that have yet to be fully defined.

One such act will be swinging through Sandpoint on their 2018 tour. The Hottman Sisters is a three-piece indie pop/rock band with a strong emphasis on melodic guitar riffs, synth, samples and tight harmonies. They will be playing the 219 Lounge on Friday, Oct. 5 from 9-12 p.m. There is no cover charge for this show. Also, with the new sound system and acoustical work at the 219 Lounge, the sound should be stellar.

Comprised of sisters Jessica and Heather Hottman, and drummer Ed Getzlaff, the trio formed in 2015 and has been touring nationally since 2015, but the upcoming show makes their debut in Idaho.

“We’ve done the east coast, the west coast, we’ve done a little in the south and the midwest,” Jessica said. “But, obviously there are places like Idaho where we haven’t been yet.”

Jessica said the band’s style evolved from an early love of pop music.

“We grew up pretty close together, listened to pop music early on and grew up playing in church, singing hymns, from a young age,” Jessica said.

The band hails originally from Omaha, Nebraska, which Jessica said can generate interesting comments and reactions from their listeners.

“The comments we get when people hear we’re from Nebraska are, ‘Oh, that’s so cute’,” Jessica said. “There’s definitely an element of surprise to our live set. We say our band name and people think folk music, but we’re on the rock side, with hints of pop. People have this impression of Nebraska as corn, cows and all that, but Omaha has music and art happening all the time.”

The songwriter of the group, Jessica said her influences have come from a variety of artists.

“Imogen Heap is a really inspirational artist for us,” she said. “The National, of course, and St. Vincent, Arcade Fire. We’re into bands that have their own brand.”

Jessica said writing songs for the group is always a different experience each time, like putting together a puzzle.

“You write from experience,” she said. “Your life forms you into who you are, past and present. The music that I write has some sort of nostalgia to it. There are elements of the past, but it’s relevant into what’s currently going on in music.”

Jessica said she plays the guitar, but prefers writing songs on the keyboard or synth.

“For the Hottman Sisters, there’s that element of poppy and fun, but dark and haunting at the same time. Our music combines both of those things.”

After first starting out playing as a folk duo at open mic nights, the Hottman Sisters found their sound merging into something more authentic to them.

“We wanted to morph into more electronic instruments,” Jessica said. “This is the sound we’ve been honing in on. We’ve got tight harmonies and a dark synth pop that has some nostalgia to it.”

The Hottman Sisters’ four-song EP “Louder” is set to release Friday. The trio has been touring in support of it and their former album since 2016.

Heather said the band has embraced their role as full-time musicians: “We’re definitly all in. I remember we had a meeting with our drummer, Ed, and we were talking about plans for touring. One of us asked him, ‘Can you be on the road and make that your primary job?’ He said yes. Didn’t skip a heartbeat. It’s really cool to be at that point that this is our primary gig. It’s a totally different lifestyle. We’re a tight knit unit. We’ve put all this work in and now we get to share our art with people.”

Catch the Hottman Sisters at the 219 Lounge Friday, Oct. 5 at 9 p.m. Listen to their newly released EP “Louder” on all major streaming services, including Spotify, iTunes and Apple Music.