County votes to proceed with suit vs. city over Festival gun-ban

Commissioner McDonald: ‘We have an obligation’

The Festival at Sandpoint had barely opened its 2019 season when open carry and concealed firearms advocates took aim at the event’s weapons ban.

“The Festival doesn’t have the right to negotiate away my right to carry a firearm on city property,” Selle Valley resident Craig Frick testified at the Aug. 7 Sandpoint City Council meeting.

Now, only a few weeks after the close of the summer concert series on Aug. 11, the city of Sandpoint is being sued by Bonner County over the Festival’s policy barring weapons.

Conflict over the no-weapons policy has centered on the fact that the Festival leases War Memorial Field from the city. As such, Idaho Second Amendment Alliance President Greg Pruett fired off a series of emails to Sandpoint City Attorney Will Herrington in early August, claiming that the Festival was in violation of the United States Constitution and Idaho statute by banning guns from the field during concerts.

According to Idaho Code, “no county, city, agency, board or any other political subdivision of this state may adopt or enforce any law, rule, regulation, or ordinance which regulates in any manner the sale, acquisition, transfer, ownership, possession, transportation, carrying or storage of firearms or any element relating to firearms and components thereof, including ammunition.” Exceptions to that rule are jails and detention facilities, courthouses, school grounds and other locations where school activities occur.

Herrington, both at the Aug. 7 council meeting and in an email response to Pruett, which was later published online by Redoubt News, said, “There is no violation of the 2nd Amendment to the US Constitution or any Idaho Statute by the City because the City has taken no action to regulate firearms.” 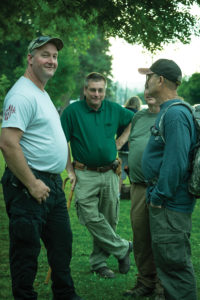 Unidentified individuals carrying firearms in Lakeview Park outside the Festival at Sandpoint gates in 2019. Photo by Racheal Baker.

Rather, Herrington said at the council meeting, “we will be supporting [the Festival’s] rights as the lessee to govern who is admitted to the park and who is not admitted to the park … [W]e simply leave it under their prerogative to not allow people with weapons to be on the premises.”

There the issue simmered until, on Aug. 22, Bonner County Commissioner Dan McDonald posted to the Sandpoint Local Forum Facebook group a letter from local firm Davillier Law Group, drafted on behalf of the county in opposition to the Festival’s weapon ban.

The letter, addressed to Herrington, followed the same legal argument as Pruett’s that allowing the Festival as a lessee of city property to prohibit firearms ran counter to the Constitution and Idaho law.

Colton Boyles, the lawyer with Davillier who wrote the letter, suggested Sandpoint legal counsel review the Festival policy and respond with “an analysis regarding the source(s) of authority relied upon by your client, the City of Sandpoint, in regulating and enforcing a prohibition of lawful firearms possession on public property.” The letter closed by requesting the analysis be concluded “as soon as possible, preferably by Monday August 26, 2019.”

“County taxpayers paid for this? A city issue?” commented local resident Sandi Nicholson on McDonald’s Facebook post. “It’s like double taxing the citizens on this issue?”

“We take an oath to uphold the US and State Constitutions as well as the laws,” McDonald replied. “What took place was a clear violation of State Statute. We have an obligation to protect the rights of the citizens in Bonner County and to follow the law.”

Once Aug. 26 passed without a legal analysis by the city, commissioners voted unanimously to move forward with filing suit against Sandpoint.

“The city’s attorney had until yesterday to respond with their position and make the move to follow the law,” McDonald told the Reader on Aug. 27. “Instead, they chose not to answer to the clear violation of state law. Our attorneys tried to start a dialogue but got nothing but stall tactics.”

McDonald told the Reader he’s sure the county has cause to be involved.

“Since the city is a municipality within the county and all residents are county residents and based on our oath of office, clearly we have standing,” he said.

When asked why the county used Davillier — a third-party law group — to file the suit, McDonald said that if a citizen were to be arrested for refusing to hand over a firearm at the Festival, both the county prosecutor and sheriff, who have come out in opposition to the Festival firearms policy, would encounter a conflict of interest and be unable to keep that citizen in county custody.

“As the chief law enforcement officer of Bonner County, it is my duty to protect our established constitutional and statutory rights,” Sheriff Wheeler wrote in a statement released Aug. 23, adding that should the county proceed with litigation, he “would request to be added as a plaintiff participant.”

BCSO officials confirmed Aug. 28 that Wheeler has formally requested to join the suit as a plaintiff.

Meanwhile, City Administrator Jennifer Stapleton reiterated the city’s position “that we have leased the space to a private entity and while under the terms of that lease the private entity has the ability to set the rules for its events.”

In a statement released late Aug. 28, the city expressed its support for the Constitution and Second Amendment, while underscoring that it had enacted no policies prohibiting citizens from carrying guns on public property — nor did the Sandpoint Police Department enforce the Festival’s weapons policy.

According to the official statement, “The Festival has banned weapons at their event as required by their artist contracts. That is within their rights as a private lessee.”

City officials would not comment further on the record — while calls to the Festival office and Festival Board President Grant Nixon went unanswered as of press time — but they did confirm that the lawsuit could have ramifications for other private entities and organizations that lease city property.

Biomedical Innovations signed a five-year lease with the city at its property near the Sandpoint Airport in 2016. Litehouse Foods also operates a warehouse on city-owned property on North Boyer Avenue, alongside MakerPoint Studios and Panhandle Special Needs Inc. Finally, the portion of the Bonner General Health campus on Alder Street between Second and Third avenues is located on city property.

How the county’s lawsuit might affect weapons policies at those sites remains to be seen. Clearer are the potential impacts to the Festival should it be forced to open its concerts to firearms.

If the organization opts to stay at Memorial Field, it would need to negotiate with artists, whose contracts frequently include gun-free riders. Mixing guns with alcohol is also a concern for many, both from a safety and enforcement standpoint — Idaho statute clearly stipulates it is illegal to carry concealed weapons under the influence of drugs or alcohol. The other alternative, and one suggested by Pruett and other opponents of the Festival weapons ban, is for the event to relocate to private property.

Regardless, from the city’s perspective, Memorial Field becomes the Festival’s venue for the duration of its lease.

“It’s just the nature of doing a lease,” Stapleton said. “They’re leasing the property, they have essentially control of that property during that time.”