Though long a vital part of downtown Sandpoint, the Panida Theater went into a twilight period toward the end of the 20th century. Years of disuse and neglect threatened to relegate the Spanish Mission-style building to the dustbin of history. Yet, Sandpointians rallied to buy the Panida and return it to its former glory. The donations rolled in and, by 1985, the future of the theater was put in the hands of community members committed to seeing it reborn.

To commemorate that Herculean effort — and raise more money — theater supporters purchased bricks etched with their names. Those bricks have since comprised the sidewalk beneath the Panida marquee; but, as the downtown Sandpoint revitalization project enters into Phase II — during which First Avenue will receive a huge facelift — the fate of the bricks is in question. 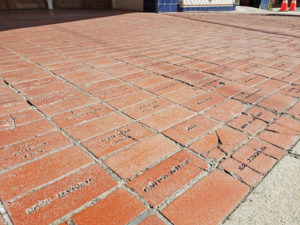 The commemorative bricks outside the Panida Theater. Courtesy photo.

Panida Director Patricia Walker announced Aug. 27 that construction crews will attempt to save each of the more than 300 two-inch-thick bricks to give them back to the individuals, businesses and families who bought them. However, the lack of an adequate stormwater drainage system combined with wear and tear from winter snow removal have made the bricks brittle and easily susceptible to crumbling.

“As hard as this is on our hearts, the [city’s] sidewalk and street project helps the Panida financially,” Walker said.

To commemorate those who stepped up to save the Panida by purchasing a brick, Walker said her team is cataloging the engraved names and intends to include them on a plaque to hang at the theater. She said anyone who would like to contribute to the plaque project should reference “Bricks” on their donation.

The city will also help memorialize the bricks by including a decorative ribbon in the new sidewalk that reads “Panida Theater – Community Supported – Mission Driven.”

“The bricks and many other tributes are public acknowledgement of the tremendous support the theater has received,” Walker said. “Each engraved brick represents a story and a family name.”

To capture those memories, Walker said people can send stories about their brick to [email protected] or submit them through an online form that will soon be active at panida.org.

Walker also said the Panida will host an event after the last brick is removed, giving sponsors the opportunity to collect their brick if it remained intact during removal.

She emphasized that crews will do their best to remove bricks in one piece, so people should not attempt to do it themselves. Creating premature holes in the sidewalk is a safety risk, Walker said, and the sidewalk needs to remain accessible until road and stormwater drainage work is finished.