The first few miles of Trestle Creek Road will see a $5 million makeover in coming years thanks to a Federal Lands Access Program grant.

Bonner County Commissioners gave the green light May 21 for Road and Bridge to enter an agreement with Western Federal Lands ensuring the county will provide a 7.34% grant match — about $370,000 — over the course of the project. That match can include in-kind labor and materials, said Road and Bridge Staff Engineer Matt Mulder. Western Federal Lands will be executing the bulk of the project. 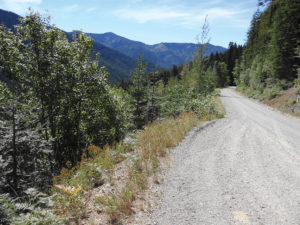 Mulder said improvements to Trestle Creek Road under the FLAP grant will include “rebuilding the gravel base, paving with asphalt, stream bank stabilization, slope stabilization and stormwater capture and/or treatment.”

“The Federal Lands Access Program seeks to improve county roads that access federal lands and that are used by the public for that purpose,” Mulder said. “Trestle Creek is a prime example of that.”

Though the original grant application asked for three miles of asphalt, Mulder said the county has been working with Western Federal Lands — the agency responsible for administering the FLAP grant — to possibly extend that asphalt to 4.1 miles. That extended stretch would go past the snowmobile parking on Trestle Creek Road and encompass the entire portion of roadway Bonner County is responsible for maintaining.

“A wider asphalt road will provide increased safety, especially during the winter when a lot of trucks and trailers are coming and going to the snowmobile parking,” Mulder said, adding that asphalt remains ice-free more often than gravel and paving a road cuts down on required long-term maintenance. “There’s also an environmental benefit of going to hard surface, as sediment discharge is reduced into the adjacent stream, which is considered critical fish habitat.”

Mulder said the county will work with Idaho Fish and Game to enhance that fish habitat and stabilize the stream bank during the FLAP project, and that work will count toward the county’s grant match.

The BOCC voted unanimously to provide the required grant match, and Commissioner Jeff Connolly lauded Mulder for his efforts on the project.

“Big thanks to Matt for bird-dogging this and making sure that it happens,” Connolly said.