Laney Lou and the Bird Dogs to play KLT benefit

Fans of high energy folk-rock/bluegrass will not be sorry they checked out Laney Lou and the Bird Dogs at the 219 Lounge tonight — Thursday, May 23 — from 6-9 p.m. The Bozeman-based band will be playing as part of a benefit for Kaniksu Land Trust, which just finalized the purchase of the Pine St. Woods in Sandpoint. 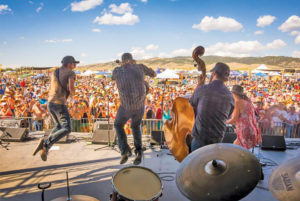 The five-piece string band consists of Lena (Laney) Schiffer, Matt Demarais, Ethan Demarais, Brian Kassay and Josh Moore. They released “Sweet Little Lies,”  their first full-length studio album in Feb. 2019 but have been impressing audiences far and wide with their breakneck style since forming and hitting the road in 2013.

The show is free, so come on down to listen to some great Americana while supporting Kaniksu Land Trust in the process. Score.