Local company Tamarack Aerospace suffered a setback with a recent order by the Federal Aviation Administration to ground all Cessna Citation 525 jets equipped with the company’s active winglet technology. 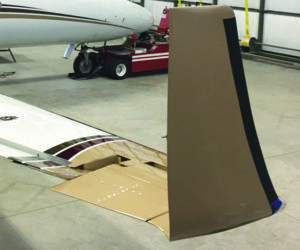 Designed to improve aircraft efficiency and save immense costs in fuel, the ATLAS winglet system promises many advantages to jets equipped with the technology. But company staffers are now working to address regulatory concerns that pilots may lose control of ATLAS-equipped aircraft.

The order follows a similar ruling from the European Aviation Safety Administration, which stated that “the active load alleviation system, when operational, deflects the Tamarack active control surfaces on the outboard wings. Recently, occurrences have been reported in which ATLAS appears to have malfunctioned causing upset events where, in some cases, the pilots had difficulty recovering the aircraft.”

According to Tamarack engineer Jacob Klinginsmith, the company has likely already addressed any design quirks that could potentially have caused problems. In fact, more than half of the fleet equipped with Tamarack winglets are unlikely to experience any troubles concerning the FAA, he said. The other half of Tamarack customers have the opportunity to upgrade their technology at no cost and have for more than a year, he added.

The order from the FAA and the EASA follows the loss of a Citation 525 equipped with the winglet technology. An investigation by the National Transportation Safety Board is looking into the cause of the incident. Klinginsmith said one sign in Tamarack’s favor may be that the NTSB did not ask the company to participate in the investigation. He believes their cooperation would be required if officials were actively investigating the winglets.

In the meantime, Klinginsmith and other company officials are working with the FAA and EASA to lift the grounding order. They are hopeful that upgrading aircraft to the latest versions of their winglet technology will address concerns.