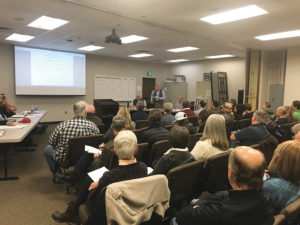 The meeting began with a public comment period, which lasted over an hour. A discussion between the commissioners and the Natural Resource committee followed, after which the commissioners decided to spend the next month polishing the document prior to an adoption vote at an upcoming business meeting.

Dan Rose spoke in favor of the plan, noting that “elections have consequences” and because conservative commissioners are currently elected, the resulting plan is also conservative leaning. Still, he emphasized the document’s value to both sides of the aisle.

“This plan allows even liberal people to use it,” Rose said. “We all gain by having this plan approved.”

The plan is useful because it is meant to use the Federal Coordination Clause to guarantee Bonner County a seat at the table with state and federal bodies look to work with the area’s natural resources, according to District One Republican Chairman and Senate candidate Danielle Ahrens. Ahrens spoke in favor of the NRP.

“This document is applicable and supports both sides, so we can have a voice,” she said.

Herb Weins, who has attended most of the NRC committee meetings over the last four years, expressed his support for the plan and reminded the crowd they had opportunities to be involved prior to the final public meeting.

Idaho Department of Lands representative Tom Fleer expressed a neutral position on the NRP and thanked the committee for changes they’d worked on together between the last two drafts, but reminded the committee changes still needed to be made honoring pre-existing endowment land policies.

More than 20 people made statements opposing the adaptation of the NRP.

Susan Drumheller, who has actively opposed the plan through continued correspondence with the commissioners, said she sees the plan as a political statement.

“Some people here are saying this plan gives us all a voice,” she said. “If this gives us a voice, it’s not my voice.”

Brad Smith with Idaho Conservation League said he wondered to what degree the county would be bound to the policies in the plan when coordinating.

“We understand there are no teeth in (the plan),” Commissioner Glen Bailey said. “But we would hope (state and federal agencies) would consider this plan.”

Karen Sjoquist, who said she works for the Idaho Department of Lands but attended the meeting as a private citizen stating her own views, said she sees the plan as a waste of time and money.

“This is a document in which the county is setting goals and objectives for state and federal lands,” she said.

Erin Mader spoke on behalf of Idaho Forest Group, stating that IFG would not support the NRP as is.

Tensions rose toward the end of the meeting when Spencer Hutchings, who voiced support for the plan, asked attendees if they truly believed the federal government should be managing Bonner County’s natural resources rather than the commissioners, who live in the area.

“Having people thousands of miles away make decisions for us is ludicrous,” he said. “If you trust the federal government more than you trust these gentlemen, you really need to look in the mirror because you’ve got a problem.”

The NRP adaptation vote will be on an upcoming but undetermined Bonner County Commissioner regular business meeting.