A couple years back, a friend called and asked if I could help a band traveling through town find a last-minute gig. My band, Harold’s IGA, was playing at MickDuff’s Beer Hall on the lawn (it was summer), so we told the band to come on down and open for us.

Little did we know it would be this awesome group led by Joseph Hein, who held court on the Rhodes organ and amazed the crowd to no end. There must’ve been half a dozen bandmates playing all kinds of instruments – bass guitars, horns, lead guitars, keyboards – you name it. 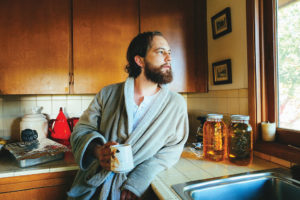 Joseph Hein contemplating at home with jars that may or may not contain whiskey. Courtesy photo.

When we took the stage after their set, it felt like we were the unfortunate band who played after the Beatles on the Ed Sullivan Show. They were that good.

Hailing from the Palouse region of Washington, Hein’s music has a soulful, warm sound that reminds me a lot of Lou Reed, except more upbeat, more accessible.

His latest album, “AM Gold,” which was recorded solo, showcases his songwriting prowess.

Hein, who just moved back to Pullman two years ago, formed a five-piece and morphed his sound.

“I switched over to playing guitar,” said Hein. “I like it better standing up and dancing around instead of hiding behind the organ.”

Hein said the new formation is more upbeat and fun, with lots of old horn parts reworked with keyboard and synthesizer effects.

“We’re just starting a month-long tour,” he said. “Last time we played the 219 it was on a Tuesday night and there were a bunch of people that came out and danced. It was an enthusiastic crowd.”

If Hein’s new band is half as good as his last arrangement, you shouldn’t miss this show.

Check out Joseph Hein Band at the 219 Lounge tonight, Jan. 18 from 8 to 11 p.m. Listen online at josephhein.bandcamp.com.