A Door in the Forest:

An interview with sculptor Steve Gevurtz

Steve Gevurtz’s artistic journey did not begin until the age of 52, when in the year 2000 he and some friends from Sandpoint went down to Burning Man. An art experience that takes place every year in the desert of Black Rock, Nev., Burning Man was the setting for experiences that deeply moved Gevurtz. The images, the creativity, the people, the moonlight, the fire: It made him want to do something creative, and he vowed to come back and take art classes to learn how to create his own. 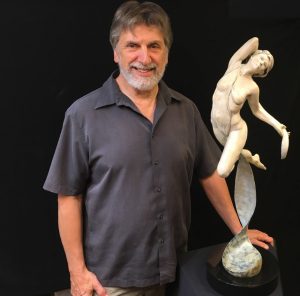 Steve Gevurtz poses with one of his creations. Photo by Kevin Penerlick.

He started with a watercolor class taught by Spokane Artist Stan Miller, followed by a portrait class with Loretta Jenkins. He took classes all over the country, drawing and painting and learning everything he could, finding himself drawn to figurative work, but never finding it clicking for him.

“It was a struggle,” said Gevurtz. “I can see it and understand it but I just couldn’t do it in only two dimensions. It was all technical, there was no emotion.”

In 2005, he took a figure drawing class at Spokane Art School, the teacher there said, “Why don’t you try sculpting and see if you feel better about what you’re doing.”

He got some clay and started sculpting, immediately falling in love with the medium and he hasn’t picked up a pen or pencil since. He sought out other sculptors in the region and learned from them. He also spent time at a forge to learn all about the casting process.

One of the biggest influences in Gevurtz’s art journey came from Stan Miller, the teacher of his first watercolor class. He learned from Stan not only about watercolor, but more importantly about composition, which was specifically impactful for Steve when it related to sculpting in three dimensions. He also learned that good composition should take the viewer on a visual journey, not leave them hanging. Their eye should be drawn into a focal point and led through the piece.

For Steve, his art is about ‘dancing with life’. It’s born from an experience or feeling that he wants to share, feelings that people can relate to. He describes his pieces and the sensations people have when viewing them as being “the hub” of a life lesson. It’s what connects them to the art, the sharing of their common experience of that feeling.

What he loves about creating his art in North Idaho is the people he works with. The models are down to earth and real. Filled with the honesty, innocence and genuineness that a small town like ours is known for. This translates into his sculptures. They work as a team, the model expressing the feeling and the artist capturing it. 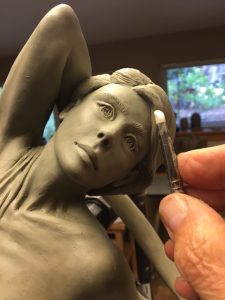 He is also influenced by his participation with the Sandpoint Sangha Meditation Group. A message he learned there was, “Your highest point of awareness of something is when you first learn it. It’s at that moment when you’re most capable of expressing it.” So when he does a sculpture, it’s usually about something he’s just learned or experienced.

Such is the case with one of his recent pieces, “Cast Your Fate to the Wind.” In addition to it being a powerful song from his childhood, it also captures a lesson he has learned, that, “We are at our strongest when we let go and let the world take us where we are meant to be.’

When Steve first began selling his art, it was about the affirmation of people wanting it. Now, he’s happy that his art sells because it allows him to keep creating. Production of a single piece can sometimes top $5,000  or more. This has also allowed him to begin giving back and influencing the artistic community himself by teaching sculpting of torsos in clay at Infini Gallery & Art Studio.

Before that experience at Burning Man in 2000, Steve had never thought of himself as an artist. He mentioned that whenever he hears someone say they can’t draw a straight line or a stick figure, he always wonders, “Why would you want to draw a stick figure anyway?”

When he speaks with people who believe they have no ability to create art, he shares his own experience that, “Talent is just a person’s level of interest, multiplied by their invested time. Talent will emerge. Lack of talent is really a lack of interest or clarity about what one wants to do.”

Envisioning a piece of art he might create to represent the experience of Sandpoint, he imagines a large bronze plaque capturing a busy day at the Farmers’ Market. Friends and multi-generational families coming together to talk, buy goods from the vendors, listen to some music and be in community with one another.

Steve will be a featured guest artist at Artworks Gallery in downtown Sandpoint during the month of December. “Cast Your Fate to the Wind” will be on display and available, as well as his newest piece, “Taking Flight.”