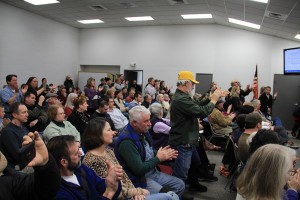 Cheers erupted from the audience when Sandpoint Mayor Shelby Rognstad asked the council to withdraw the resolution from consideration. A measure meant to counter statements from the Bonner County commissioners and sheriff opposing the resettlement of refugees, the resolution was intended to restate Sandpoint’s commitments to human rights, according to Rognstad.

“This resolution has only served to divide us and this community,” said Rognstad as he requested the withdrawal. “That saddens me.”

Once again, anti-refugee activists turned out in force to oppose the resolution, and once again, the council meeting procedure was punctured by applause and shouts. When Rognstad called for order, the crowd responded with catcalls.

The evening also saw a mobilization of refugee supporters, who held a candle-lit vigil outside City Hall. Anti-Islam demonstrators gathered on the other side of the parking lot waving American flags and signs. 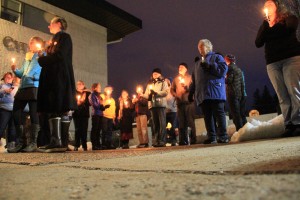 For Rognstad, the issue was a matter of community values. He said the resolution was intended as a statement similar to the human rights resolutions and non-discrimination ordinances that Sandpoint has approved in the past.

However, it was clear from the outset that council support had fallen away from the resolution. Councilman Tom Eddy opened the discussion by saying he could not vote in favor of the resolution.

“I cannot support the resolution as it stands,” he said. “It serves as a piece of rhetoric that only serves to be divisive.”

In the same vein, Councilwoman Deb Ruehle issued a plea for community solidarity.

“None of us here in this room are people of hatred,” she said. “[This issue] is not cut and dried. It is extremely complex.” 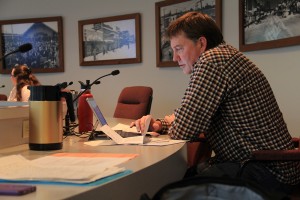 “There is too much unrest, too much negativity,” she continued. “Mr. Mayor, please withdraw this resolution.”

The decision was a victory for those who opposed the resolution. Victoria Zeischegg, a prominent local conservative figure, said she was pleased with the decision.

“I appreciate the withdrawal,” she said.

Others saw the decision as a defeat for human rights in Sandpoint. Daniel Radford, one of the members of the candle-lit vigil, said he was a committed Christian but was disturbed by the message many were presenting in the name of Christ.

“I’m disappointed to see so many good Christian people worship the fear of Muslims rather than the fear of God,” he said.