It was a leap of faith when Fred Colby left his career to start Laughing Dog Brewing.

Twelve years later, it’s clear that he landed on remarkably solid ground. Laughing Dog Brewing is a smash hit, its award-winning beers finding taps and grocery store space all over the country. It’s an achievement worth celebrating as Laughing Dog’s staff plan the business’ 12th anniversary party on Saturday, Aug. 26, from 12-8 p.m.. 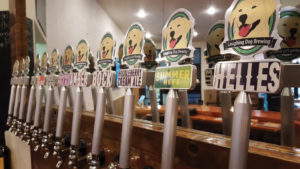 Prior to founding Laughing Dog, Colby worked a secure job at Coldwater Creek. It seemed at the time to be a major risk leaving the company to start a new business, but time would prove the decision a wise one. Had Colby stayed with Coldwater Creek, it’s likely that he would have had to leave Sandpoint in search of new employment after the company closed its doors.

“(It) was a bit of a leap, but I was really burned out and needed a change,” Colby said. “It took some thought and about a year of planning to make the jump, but we did it and have never looked back (OK, well, maybe sometimes we have).

“I won’t say it wasn’t scary because it was,” he added. “The craft beer industry suffered a huge setback a few years before, but we felt that the timing was right, and we made it work.”

Laughing Dog has a series of special events planned for the party, set for Aug. 26 from 12-8 p.m. The day will feature music by Harold’s IGA, food by The Old Tin Can food truck and a special 12th-anniversary beer. At about 5:45 p.m., a drawing for a custom-made Greasy Fingers bike will take place, with the proceeds going to Panhandle Animal Shelter. Ticket-holders must be present to win.

“It’s a bit bittersweet this year as Benny (the Laughing Dog dog) won’t be around to help celebrate the anniversary, but I am really looking forward to this year’s party,” Colby said. “It’s kind of like: wow, 12 years already.”