It’s been years since Sandpoint City Hall saw a turnout like this Wednesday. About 150 bodies packed the building for the debate over a proposed council resolution welcoming refugees. 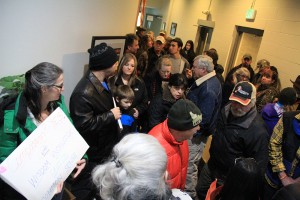 Overflow from the capacity crowd at Wednesday’s council meeting in Sandpoint. Photo by Ben Olson.

So many people attended the public meeting that city staff had to shut a few dozen late-comers out of the City Council chambers. Newly-sworn-in Mayor Shelby Rognstad presided over a doubtlessly memorable first council meeting as dozens shared their thoughts. Despite the lively comments, council deliberation ended anticlimactically with members choosing to table the issue.

“I wholeheartedly stand by my commitment to human rights, but after hearing everything tonight … I cannot in good conscience vote either way on this issue tonight,” said Councilwoman Deb Ruehle. 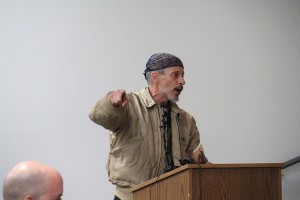 A member of the public speaks to the council Wednesday night. Photo by Ben Olson.

“I ask you give the same weight to county residents as city residents because the decision you make here affects all of us,” said Dan McDonald.

If the meeting was the most well-attended in years, it was also the most unruly. Requests by city officials and Sandpoint Police Chief Corey Coon to stop clapping, heckling and speaking out of order went unheeded. Some commenters chided the chaotic behavior in particular.

“A lot of you do not have the simple respect and civility to let someone speak,” said Michael McLaughlin, who supported the resolution. “That is what fears me the most.”

Comments opposing refugees tended toward their financial needs, saying they would burden the welfare system and require jobs the county couldn’t support. Another large portion focused on Islam, claiming the religion’s goal was to infiltrate societies and transform them from the inside out.

“I have lived with, ate with slept with and fought with and against people of this culture for most of my adult life,” said Matthew Reese, citing his military service. “They are not of our culture, not of our ideology.” 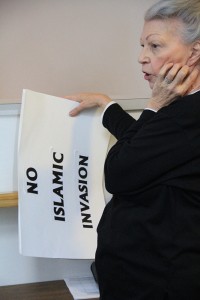 A protestor at Wednesday’s council meeting in Sandpoint. Photo by Ben Olson.

Many opposed to the resolution took particular umbrage with one particular section, which states that many responses to refugees brought to mind “thoughts of Nazi Germany, Japanese internment camps [and] McCarthyism.” Many found the passage inflammatory.

“When I find my own government addressing me as a Nazi, I am worse than offended,” said Anita Aurit.

However, when Rognstad voiced his thoughts that excising the section would resolve many concerns, he was met with a chorus of nays from the crowd. Attendees also grew perturbed at the one-minute time restriction to publicly comment, resulting at one point in a wave of booing.

While resolution opponents outnumbered supporters, a significant minority stood in favor of the resolution. They focused on the importance of upholding traditional American values like tolerance and freedom of religion.

“Without the principles and ideals for which I think I fought [in the Vietnam War], we have little to stand for that is worthy,” said Barney Ballard.

Others pointed out the need to present Sandpoint as welcoming community. Jeremy Grimm, while neutral on the resolution, said one of Sandpoint’s most generous community contributors, Rafat Saied, was a Muslim. Furthermore, he said a local reputation for friendliness is good for local businesses.

“What is important is the image you’re trying to convey here portraying Sandpoint as a friendly, accepting, loving place,” he said. “I think it’s very important for our businesses here.”

While council members voted to table the issue, the controversy is far from over. They will pick up the resolution again on Jan. 20 and potentially take final action to adopt or reject the measure.