Bleeding Hearts Tattoo Emporium has been planning to participate in the “Adopt a Highway Program” for some time, but when shop owner Jon Bates heard one of his clients was having trouble navigating the path portion of the Long Bridge in her wheel chair, he knew exactly where to adopt. 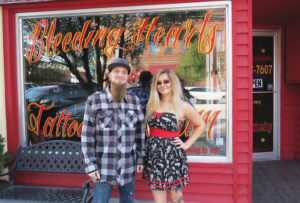 “We thought it would be pretty cool because it’s something that’s used regularly,” Bates said of the walking path along the bridge.

Bleeding Hearts tattoo artist and body piercer Erika Cox put the plan in motion, and now the shop’s name will grace the Long Bridge as soon as the signs are ready. In the meantime, Bleeding Hearts is planning a clean-up day for Oct. 7.

“We’ve been really involved in the community since we opened,” Bates said, noting the shop’s involvement with local fundraisers and events over the years. “This is just another way to get a few more people involved and have some fun doing it.”

Bates and Cox said according to who they spoke with at the Idaho Department of Transportation, this is the first time the Long Bridge path has been officially tidied up in 20 years, making it a daunting task. Between garbage, debris and gravel, Cox said there will be plenty to do. They plan to get as much done as they can on Oct. 7, Bates said, and anyone is welcome to come help out.

While bags, safety vests, pizza and drinks will be provided by Bleeding Hearts, Bates said they will need people to bring leaf blowers and brooms. He said if people want to help but can’t attend the actual event, lending their blowers and brooms would be a tremendous help.

Bates said he’ll be bringing his kids along to help with the clean-up, and encourages other people to bring their children to this family-friendly event. Cox said she did a highway clean-up to earn community service hours for a class in high school and that she’s grateful for the lesson she learned through that experience.

“Everything you do — it goes somewhere,” she said. “There’s a ripple effect with everything.”

To participate, meet at the north end of the Long Bridge on Oct. 7 at 10 a.m. Learn more on Bleeding Hearts Tattoo Emporium’s Facebook page under the event “The Long Bridge Clean-up.” Anyone with questions should contact the shop on Facebook or call (208)597-7607.