Sandpoint City Council members unanimously voted July 17 to approve the rezone of 8.5 acres of property northwest of the Sandpoint Airport, bringing to a close eight months of often heated debate pitting property owners Steve and Maureen Tillberg against the city in what they characterized as an attack on their property rights. 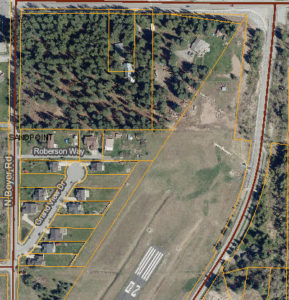 An aerial photo of the Sandpoint Airport with property lines highlighted. Courtesy City of Sandpoint.

“Steve and I have spent the last eight months and thousands of dollars defending our right to have this property rezoned,” Maureen Tillberg testified at the public hearing. “A simple rezone request has basically turned into a nightmare for us.”

The decision came after more than two-and-a-half hours of testimony, during which about a dozen residents came out in favor of the rezone and six spoke or submitted written commentary against it.

Proponents generally agreed that development of the property under the requested mixed-use residential zoning would increase the amount of affordable housing available in the community — a need sorely felt amid ever-increasing housing prices and low wages in the county.

“This is not a new issue to Sandpoint,” said Sharon Albert, of Sandpoint. “The situation here is driving the workforce out of town. … You’re losing your workforce because they can’t afford to live here.”

Opponents of the request were overwhelmingly drawn from area residents with connections to the airport, whether as pilots, business owners or otherwise involved with management at the facility. Their concerns centered on safety — with more than a few speakers stating that a high-density residential development located so near the end of the runway posed an unacceptable risk in the case in the case of air crashes.

“It happens,” said Scott Dempsey, of Snug Harbor, who related an incident when an aircraft crashed within 100 feet of the Tillbergs’ property line — so close, he added, that Steve Tillberg helped with recovering the debris.

“I just don’t think it’s a good idea to have high-density residential in that area,” said Dempsey.

Other opponents highlighted the potential risk to federal funding should incompatible land uses crop up within the airport overlay zone — an area established by City Code that mirrors federal aviation regulations restricting building heights near airports — which covers the entirety of the Tillbergs’ property.

Airport Manager Dave Schuck testified that while mixed-use residential development on the Tillbergs’ land wouldn’t necessarily represent a violation of Federal Aviation Administration grant assurances, it would lower the airport’s standing with the agency in future grant requests.

“These are discretionary funds,” he said.

Aside from promises of affordable housing, many proponents’ arguments were rooted in the sense that the Tillbergs had already done their due diligence and followed the city’s protocols for a successful rezone.

“These guys [the Tillbergs] did their work, and I’m asking you guys to do your work based on the rules and regulations that were in place when they did it,” said Rhea Maloney, of Sandpoint.

City planners and the City Council both gave their blessing to the request in the spring, but Mayor Shelby Rognstad vetoed the approval in April in favor of gathering more public input.

“It was a difficult decision by council given the confliction between supporting workforce housing through higher density zoning and supporting airport growth and funding for maintenance,”  Rognstad told the Reader. “Housing won. I appreciate the strong public showing on both sides of the issue. It went a long way to help council make a thoughtful decision.”

Ahead of his vote in favor of the rezone, Councilman Tom Eddy agreed that the request met the requirements of City Code.

“I understand your concerns. I understand the safety risks. I understand a lot more about this than I did the first time around,” he said. “But, you know, we have our Code and that’s what I have to base my decision on.”