In service of the Horde

How World of Warcraft changed my life

When my best friend, David, sat me down to try World of Warcraft in 2008, I never anticipated that it would change my life. Honestly, when I created my first character, a Forsaken Mage named Zephyr, I didn’t even like the game. My formative years had been spent in roleplaying games in which my actions had consequences and deep narratives, like Neverwinter Nights and The Elder Scrolls III: Morrowind. The idea of being told to go kill 20 Level 3 boars with absolutely no impact on the world just didn’t appeal to me, so I stopped playing it. 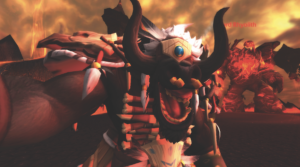 “I’m done,” I said, “I’ve tried World of Warcraft like a real gamer and it just wasn’t for me.”

Then, in February 2009, I broke my leg. It was a severe open fracture of both the tibia and fibula, which led to me needing to take a two-month leave of absence from my job and a ludicrous amount of bed rest.

“Well, it’s not like you have anything else to do,” David half-joked, “Why don’t you give WoW another go?”

I wasn’t quite convinced, but I didn’t want to disappoint my friend. Instead, I picked up Warcraft III, a real-time strategy game that took place before World of Warcraft. I played my way through the campaign and immediately fell in love with the characters. Why couldn’t the world-famous MMO be like this masterpiece, I wondered.

I quickly discovered World of Warcraft wasn’t like its predecessor, because it was so much better.

Enraptured by the story of the Tauren, a race of sentient cow-people who seek to protect themselves and Azeroth — the world that Warcraft is of — from forces that would stop at nothing to destroy them both, I logged back into the game and created my first real character: Jikath, Llevel 1 Tauren Warrior.

As with just about everything else I’ve done, my interest bounced around inefficiently within the game world. I gained levels slowly; asked plenty of stupid questions; and created a small army of characters I didn’t really understand, excel at or even really enjoy that much. I was, as so many denizens of the internet would come to call me: a noob. That insufferable, inexperienced little whelp destined to stumble and fall in Darwin’s great race for survival. Lucky for me, after every arduous defeat, a spirit healer would be waiting to infuse my poor, ignorant soul back into my body and let me face my challenges again head-on.

Every bad experience taught me a little bit more of how to solve new problems. I learned what skills to use and when to use them, I learned not to stand in the fire, and eventually learned to find my voice and use it to lead our rag-tag group of loot-hungry adventurers to victory.

I played for several months, eventually becoming quite comfortable with a handful of characters I began to enjoy. Poor Jikath had fallen by the wayside as my interest turned to Arsuria, a Level 80 Blood Elf Paladin that used the powers of light to heal allies’ wounds and keep them fighting through any trial or tribulation.

A few months became a couple of years. We had conquered the Lich King at the pinnacle of Icecrown Citadel — we halted the Destroyer, Deathwing, from bringing about a cataclysm at the heart of Azeroth that would have wiped away all life — and now we had traveled to Pandaria, an Asian-themed continent filled with Chinese dragons, murderous stone lions and, you guessed it, a race of sapient pandas.

I had joined a guild by now, a group of likeminded players that gather together to defend the world from evil, and we found ourselves at the steps of the Throne of Thunder, a new area threatening to drown the world in electrical storms at the behest of Lei Shen, the Thunder King. Arsuria had gotten much stronger by now, augmented even further by the fact that I knew what buttons to press to not be terrible. It was here that I met Tragicdevil, a Troll Balance Druid, often comically called a “Laser Chicken” because of their shape-shifting form that blasts lasers everywhere.

Tragicdevil and I played together with a host of other adventurers. At some point, we had all decided to add one another on Facebook, and the friendship with Tragicdevil soon blossomed into something more. We spoke on voice chat regularly, where we shared the difficult situations we were in at that time in real-life and it only reinforced our connection.

Eventually, Tragicdevil and I met in-person for a frigid North Idaho spring break. Five years later, we got married at Trestle Creek under parting clouds, with the lake at our sides and the guy who led me to meet her to begin with — my best man David — bawling like a baby right behind me.

The game’s eighth expansion, World of Warcraft: Shadowlands is set to be released in 2020. If you’re thinking about getting back into the game or just starting out, feel free to add my battle.net account to your friends list: Unkers#1108. Unlike trade chat, I’m always willing to offer a helping hand.