Long Bridge Swim provides community with sense of accomplishment, and so much more

In the early ‘90s, Eric Ridgway drove Sandpoint’s Long Bridge every day. For a man who describes swimming as his “therapy, joy and meditation,” it isn’t surprising to hear that during those drives he always thought, “I’ve got to swim this sometime.”

And he did. In 1994 with two friends on kayaks by his side in case of emergency, Ridgway felt small and insignificant in a blue abyss, and yet had so much fun—a feeling he wanted to share. 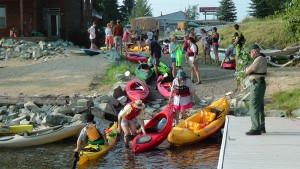 “I wanted to create an event to help people take on a challenge they weren’t confident they’d achieve, and then help them reach incredible success,” Ridgeway said.

So in 1995, the Long Bridge Swim was officially born.

Despite these humble beginnings, current director Jim Zuberbuhler anticipates over 750 swimmers will kick their way across the 1.76-mile watery expanse during the 22nd Long Bridge Swim, taking place this Saturday, Aug 6.

The substantial growth in participant numbers is not only an indication of the event’s popularity, but also something that has caused an evolution in how the event is run. What began as a single man swimming the expanse is now a production worthy of a T-shirt for each participant—and if that doesn’t say “official,” what does?

“One significant change is that we’ve had to get far more organized—we’ve become a machine,” Zuberbuhler said. “We used to be able to run this fairly ‘seat-of-our-pants,’ and we can’t anymore. We have to be dialed in.”

Zuberbuhler said being “dialed in” deals mostly with the Long Bridge Swim’s sophisticated safety program. The more swimmers that are willing to come out and try the swim, the more safety protocol is in order. This includes the involvement of the Bonner County Sheriff’s Department along with dozens of bridge spotters and kayakers amidst the swimmers.

“I want the same number of bathing caps to come out that went in,” Zuberbuhler said.

“If we’re doing our job, [participants] wouldn’t even know everything that’s going on,” Zuberbuhler said.

Something that participants and community members might also not realize is that the Long Bridge Swim does not begin and end with the first Saturday in August. Sure, the swim itself might, but the event’s impact leaves a mark all year long through programs like Zuberbuhler’s brainchild: a swim lesson initiative to teach every child in Bonner County how to swim.

In 2009, after learning that two North Idaho children had drowned, Zuberbuhler wondered if the Long Bridge Swim could do something to help.

“The more I looked, and the more I asked, the more I realized there was a problem,” he said.

Now, every school year, third- graders from around the Lake Pend Oreille School District are taken to Sandpoint West Athletic Club and given swim lessons. The goal? No child graduates third grade without being able to swim. This past year, Zuberbuhler said nearly 1,000 children went through the program with the help of Long Bridge Swim sponsorship money.

“We’ve been able to bring leverage to the event and bring attention to this problem,” he said, noting that the behind-the-scenes benefits of the swim do not stop there.

Every year, with excess funds from registration costs, the Long Bridge Swim funds another project—different every year, but always positive for local swimming. Past projects have been an investment in a machine that cleans goose poop off of City Beach, the installation of new pilings at Dog Beach and sponsorship of a training program to keep lifeguards at City Beach.

Ridgeway said his hope is that people of all abilities come out to swim and then continue to do so for Long Bridge Swims to come. He also encourages anyone on the fence to come spectate, in the hopes they’ll gain confidence to swim next year. He emphasized that anyone can do the swim—from pregnant women to paralyzed veterans, he has seen it all.

“People may surprise themselves. There is a real sense of accomplishment,” he said. “My hope is that they have so much fun, they want to do it year after year after year.”

After all, he didn’t start the swim for seasoned swimmers — he said he started the Long Bridge Swim to help people overcome their perceived limitations.

“I want people to realize that they are so much more amazing than they believe,” Ridgeway said.

Though online registration is currently closed, a last chance to sign up for the Long Bridge Swim is Friday from 5:30-7 p.m. at Sandpoint High School. No one can register on Saturday, the day of the event. The mandatory safety meeting for all registered swimmers takes place at 8 a.m. the morning of the race at SHS, after which 18 buses will transport swimmers to the event, where the breaststroking and doggy-paddling may commence at 9 a.m.